BM-derived endothelial progenitor cells (EPCs) are critical and essential for neovascularization in tissue repair and tumorigenesis. EPCs migrate from BM to tissues via the bloodstream, but specific chemotactic cues have not been identified. Here we show in mice that the absence of CCR5 reduced vascular EPC accumulation and neovascularization, but not macrophage recruitment, and eventually delayed healing in wounded skin. When transferred into Ccr5–/– mice, Ccr5+/+ BM cells, but not Ccr5–/– cells, accumulated in the wound site, were incorporated into the vasculature, and restored normal neovascularization. Consistent with these observations, CCL5 induced in vitro EPC migration in a CCR5-dependent manner. Moreover, expression of VEGF and TGF-β was substantially diminished at wound sites in Ccr5–/– mice, which suggests that EPCs are important not only as the progenitors of endothelial cells, but also as the source of growth factors during tissue repair. Taken together, these data identify the CCL5/CCR5 interaction as what we believe to be a novel molecular target for modulation of neovascularization and eventual tissue repair.

Quantitative evaluation of EPCs after injury. 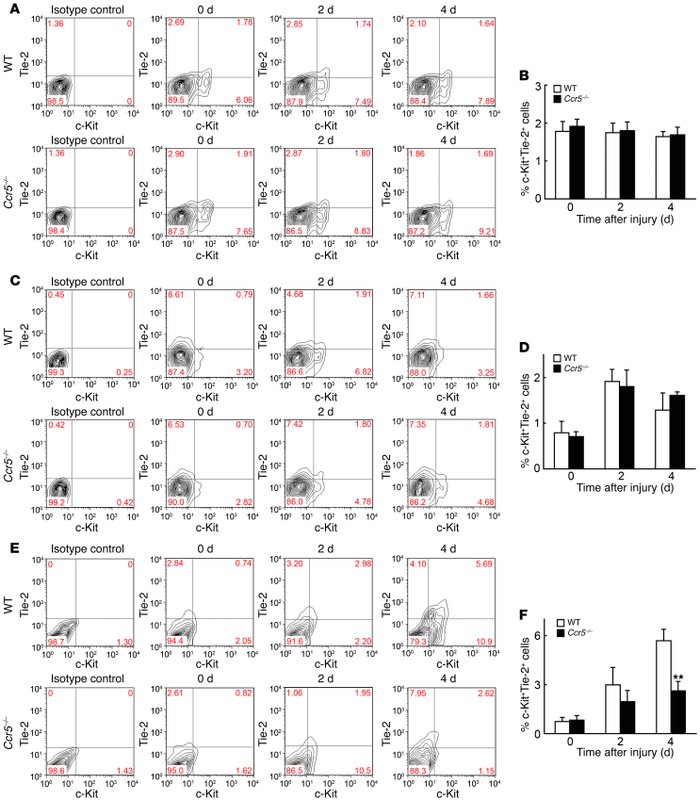 ( and ) BM, ( and ) peripheral blood, and ( and ) wound sites were analyzed to determine c-Kit+Tie-2+ EPCs. (, , and ) Flow cytometric analysis. Representative results from 6 independent experiments are shown. Numbers within plots denote percent cells in the respective gates. (, , and ) Percent c-Kit+Tie-2+ EPCs. Values represent mean ± SEM ( = 6). ** < 0.01 versus WT.