Human cytomegalovirus (HCMV) in clinical material cannot replicate efficiently in vitro until it has adapted by mutation. Consequently, wild-type HCMV differ fundamentally from the passaged strains used for research. To generate a genetically intact source of HCMV, we cloned strain Merlin into a self-excising BAC. The Merlin BAC clone had mutations in the RL13 gene and UL128 locus that were acquired during limited replication in vitro prior to cloning. The complete wild-type HCMV gene complement was reconstructed by reference to the original clinical sample. Characterization of viruses generated from repaired BACs revealed that RL13 efficiently repressed HCMV replication in multiple cell types; moreover, RL13 mutants rapidly and reproducibly emerged in transfectants. Virus also acquired mutations in genes UL128, UL130, or UL131A, which inhibited virus growth specifically in fibroblast cells in wild-type form. We further report that RL13 encodes a highly glycosylated virion envelope protein and thus has the potential to modulate tropism. To overcome rapid emergence of mutations in genetically intact HCMV, we developed a system in which RL13 and UL131A were conditionally repressed during virus propagation. This technological advance now permits studies to be undertaken with a clonal, characterized HCMV strain containing the complete wild-type gene complement and promises to enhance the clinical relevance of fundamental research on HCMV.

Steps in the construction of pAL1111. 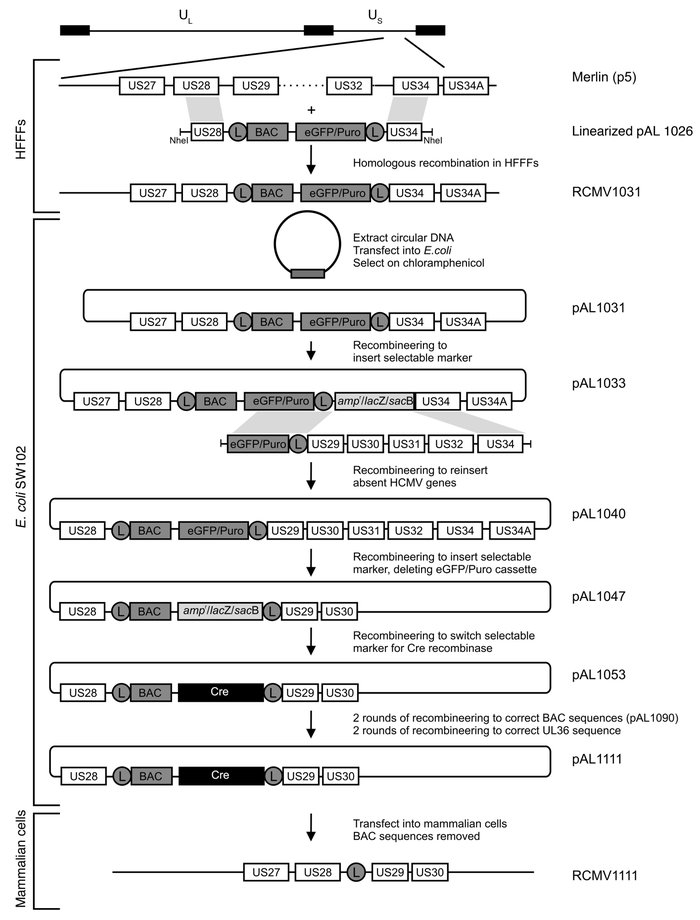 The approximate location of the insertion site of the BAC vector between US28 and US29 in the US region of the HCMV genome is shown at the top. The designations of BACs (pAL series) and viruses (RCMV series) are shown on the right. Boxes indicate protein-coding regions (labeled), and circles denote sites (L). The BAC box represents pBeloBAC11, the eGFP/Puro box represents a cassette expressing eGFP and a puromycin resistance protein, and the Cre box represents a Cre recombinase gene containing a synthetic intron.