Intestinal epithelial cell (IEC) apoptosis contributes to the development of ulcerative colitis (UC), an inflammatory bowel disease (IBD) that affects the colon and rectum. Therapies that target the inflammatory cytokine TNF have been found to inhibit IEC apoptosis in patients with IBD, although the mechanism of IEC apoptosis remains unclear. We therefore investigated the role of p53-upregulated modulator of apoptosis (PUMA), a p53 target and proapoptotic BH3-only protein, in colitis and IEC apoptosis, using patient samples and mouse models of UC. In UC patient samples, PUMA expression was elevated in colitis tissues relative to that in uninvolved tissues, and the degree of elevation of PUMA expression correlated with the severity of colitis and the degree of apoptosis induction. In mice, PUMA was markedly induced in colonic epithelial cells following induction of colitis by either dextran sulfate sodium salt (DSS) or 2,4,6-trinitrobenzene sulfonic acid (TNBS). The induction of PUMA was p53-independent but required NF-κB. Absence of PUMA, but neither absence of p53 nor that of another BH3-only protein (Bid), relieved DSS- and TNBS-induced colitis and inhibited IEC apoptosis. Furthermore, treating mice with infliximab (Remicade), a clinically used TNF-specific antibody, suppressed DSS- and TNBS-induced PUMA expression and colitis. These results indicate that PUMA induction contributes to the pathogenesis of colitis by promoting IEC apoptosis and suggest that PUMA inhibition may be an effective strategy to promote mucosal healing in patients with UC. 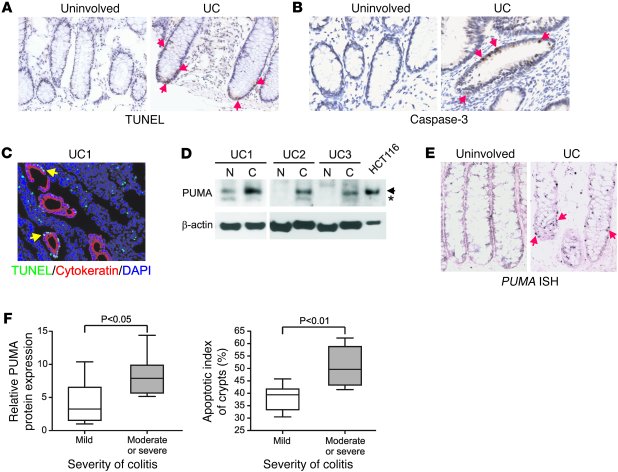