Structural changes in the androgen receptor (AR) are one of the causes of defective spermatogenesis. We screened the AR gene of 173 infertile men with impaired spermatogenesis and identified 3 of them, unrelated, who each had a single adenine→guanine transition that changed codon 886 in exon 8 from methionine to valine. This mutation was significantly associated with the severely oligospermic phenotype and was not detected in 400 control AR alleles. Despite the location of this substitution in the ligand-binding domain (LBD) of the AR, neither the genital skin fibroblasts of the subjects nor transfected cell types expressing the mutant receptor had any androgen-binding abnormality. However, the mutant receptor had a consistently (approximately 50%) reduced capacity to transactivate each of 2 different androgen-inducible reporter genes in 3 different cell lines. Deficient transactivation correlated with reduced binding of mutant AR complexes to androgen response elements. Coexpression of AR domain fragments in mammalian and yeast two-hybrid studies suggests that the mutation disrupts interactions of the LBD with another LBD, with the NH2-terminal transactivation domain, and with the transcriptional intermediary factor TIF2. These data suggest that a functional element centered around M886 has a role, not for ligand binding, but for interdomain and coactivator interactions culminating in the formation of a normal transcription complex. 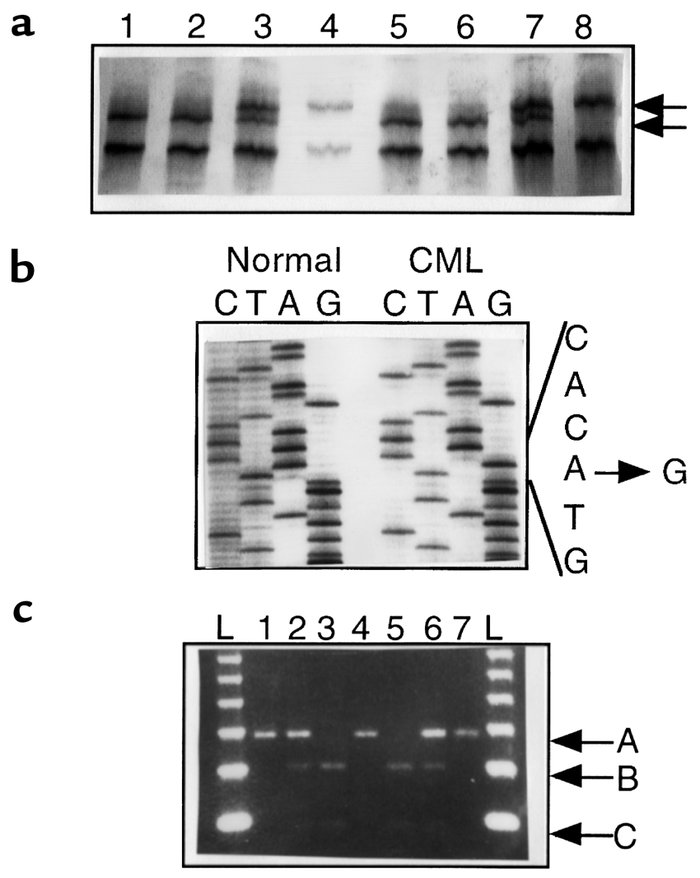 () SSCP analyses of family members of 2 probands. Exon 8 fragments were amplified from genomic DNA and electrophoresed on a PAGE gel to display SSCP mobility shifts. The probands, CML (lanes 2 and 6) and KLH (lanes 1 and 5), have a mutant DNA strand (lower arrow) that migrates faster than the WT allele (upper arrow) from the unaffected siblings (sister of CML, lane 4; brother of KLH, lane 8). Mothers of CML (lane 3) and KLH (lane 7) have both mutant and WT alleles, indicating that both women are carriers. () Sequencing autoradiogram of a portion of exon 8 from patient CML compared with the normal. Three patients had the same A→G substitution. () Restriction analyses of family members of 2 patients (CML, KLH). Exon 8 fragments were amplified from genomic DNA and restricted with P1. The M886V mutation creates a new P1 site such that enzymatic digestion results in 2 fragments ( and ) in the probands (lane 3, CML; lane 5, KLH), whereas normal alleles (lane 1, sister of CML; lane 4, normal fertile man; lane 7, brother of KLH) have only 1 fragment (), measuring 347 bp. Mothers of CML (lane 2) and KLH (lane 6) display all 3 fragments, indicating their heterozygous status. Outer lanes are 123-bp DNA ladders (L).