CD36 is a membrane glycoprotein expressed on platelets, monocytes, macrophages, and several other cell types that was recently demonstrated to be involved in platelet activation in response to oxidized phospholipids, including oxidized LDL. Although the role of CD36 in other vascular cells has not been well defined, previous studies have demonstrated that cd36-knockout (cd36–/–) mice have prolonged thrombosis times after vascular injury, which can be protective in the state of hyperlipidemia. Here, we found significantly less ROS in the vessel walls of cd36–/– mice compared with WT after chemically induced arterial injury, suggesting that CD36 may contribute to ROS generation in the VSMCs themselves. Gene expression analysis revealed that the antioxidant enzymes peroxiredoxin-2 (Prdx2) and heme oxygenase-1 were upregulated in cd36–/– VSMCs. Molecular dissection of the pathway in isolated mouse VSMCs revealed CD36 ligand-dependent induction of Fyn phosphorylation, with subsequent phosphorylation and degradation of the redox-sensitive transcription factor Nrf2. Chromatin immunoprecipitation experiments further showed that Nrf2 directly occupied the Prdx2 promoter. The importance of this pathway was evidenced by increased ROS generation in prdx2–/– mice and decreased thrombosis times in both prdx2–/– and nrf2–/– mice after vascular injury. These data suggest that CD36-mediated downregulation of antioxidant systems in VSMCs may contribute to its prothrombotic, proinflammatory, and atherogenic effects. 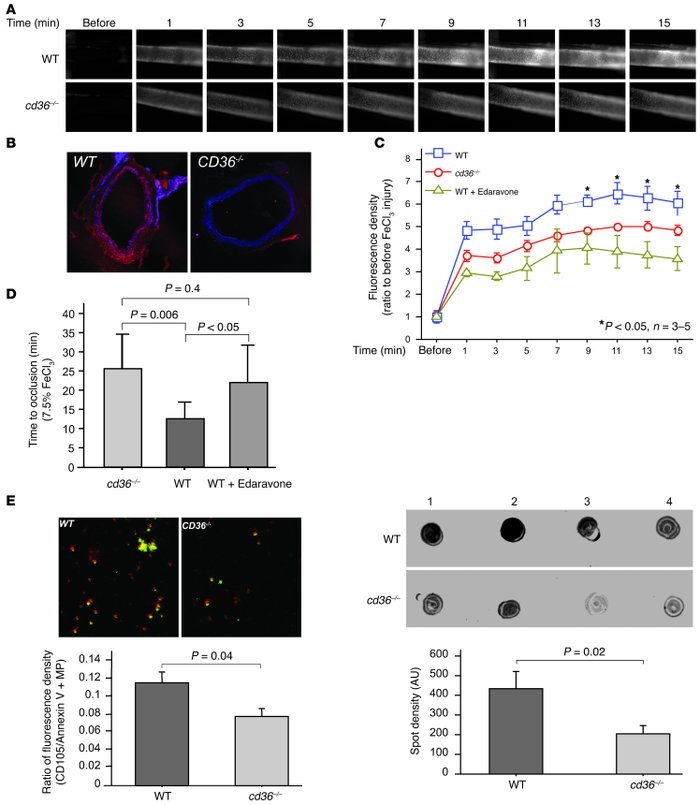 () ROS formation is diminished in the vessel wall of mice. Hydroethidine (10 μg/g in 150 μl saline) was injected into the jugular veins, and the carotid arteries were imaged using intravital microscopy before and after FeCl3 treatment. () ROS formation after FeCl3 injury is located within the vessel wall. Cross sections of the above vessels were examined with laser confocal microscopy. Blue represents autofluorescence of elastic lamina. Red is from 2-hydroxyethidium/ethidium and reflects ROS formed after FeCl3 treatment. Original magnification, ×400. () Edaravone, a free radical scavenger, decreases ROS formation to an extent similar to that seen in mice. Edaravone (1 mg/kg) and hydroethidine were directly injected into the jugular veins of the WT mice, and ROS formation on the vessel wall was examined as in . The fluorescence density of each frame was analyzed by NIH image. () Inhibition of ROS formation prolongs occlusion time after FeCl3 injury. Edaravone was injected into the jugular veins as above, and time to form an occlusive thrombus was measured after carotid artery injury by FeCl3. One-way ANOVA (Bonferroni/Dunn) was used to determine the differences among groups ( and ). () EMPs are decreased in plasma from mice after FeCl3 injury. Mice were injected with heparin sulfate (100 USP), and then the carotid arteries were injured with FeCl3. 5 minutes later, whole blood was harvested by heart puncture and MPs were collected by centrifugation. EMPs were evaluated by laser confocal microscopy (left panels) using antibodies to CD105 (green) and annexin V (red) and by dot immunoblot (right panels) using anti-CD105. Original magnification, ×5040. Data are represented as mean ± SEM.