Severe scaling and psoriasiform dermatitis in the patient. 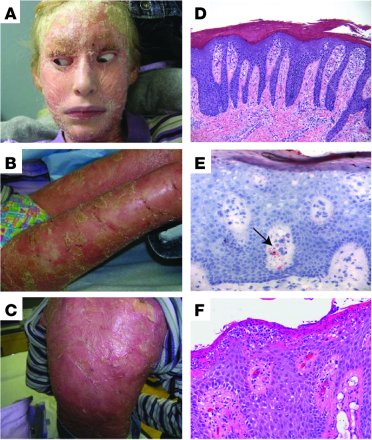 () Note mild microcephaly, lusterless, fine fair hair, and blepharitis. ( and ) The ichthyosiform erythroderma covers all of the patient’s body except for the palms and soles. () H&E-stained section of affected skin shows hyperkeratosis (original magnification, ×10), loss of granular layer, psoriasiform hyperplasia, thinning of suprapapillary plate, and neutrophilic epidermal infiltration; these features are characteristic of psoriasis. () Oil red O staining of affected skin biopsy (original magnification, ×20) The arrow shows the intracellular lipid accumulation in the foamy cells in the dermis. () Neutrophil elastase staining (shown in red) of neutrophils in the stratum corneum of affected skin (original magnification, ×20). Photographs reproduced with signed informed consent/assent provided by the patient and her family.