Autophagy is essential for mouse sense of balance

Autophagy is essential for mouse sense of balance

Autophagy is an evolutionarily conserved process that is essential for cellular homeostasis and organismal viability in eukaryotes. However, the extent of its functions in higher-order processes of organismal physiology and behavior is still unknown. Here, we report that autophagy is essential for the maintenance of balance in mice and that its deficiency leads to severe balance disorders. We generated mice deficient in autophagin-1 protease (Atg4b) and showed that they had substantial systemic reduction of autophagic activity. Autophagy reduction occurred through defective proteolytic processing of the autophagosome component LC3 and its paralogs, which compromised the rate of autophagosome maturation. Despite their viability, Atg4b-null mice showed unusual patterns of behavior that are common features of inner ear pathologies. Consistent with this, Atg4b-null mice showed defects in the development of otoconia, organic calcium carbonate crystals essential for sense of balance (equilibrioception). Furthermore, these abnormalities were exacerbated in Atg5–/– mice, which completely lack the ability to perform autophagy, confirming that autophagic activity is necessary for otoconial biogenesis. Autophagy deficiency also led to impaired secretion and assembly of otoconial core proteins, thus hampering otoconial development. Taken together, these results describe an essential role for autophagy in inner ear development and equilibrioception and open new possibilities for understanding and treating human balance disorders, which are of growing relevance among the elderly population. 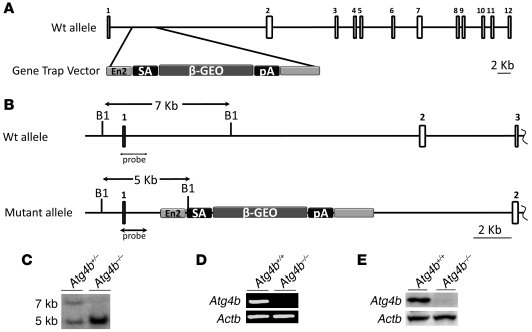 () Top: Schematic representation of the WT locus, in which the coding exons are depicted as numbered boxes. Bottom: Gene trap vector structure containing a splicing acceptor (SA), a bacterial β-galactosidase fused to the neomycin resistance gene (β-geo), and a polyadenylation signal (pA). () Schematic representation of the WT and mutant loci showing the new (B1) restriction polymorphism generated by the insertion of the gene trap vector. The DNA probe used for the detection of the mutant allele is shown. () Southern blot analysis of genomic DNA from and –/– mice. () RT-PCR of RNA of liver tissue from WT and mice showing the absence of full-length mRNA expression in mutant mice ( = 6 mice per genotype). () Immunoblotting of liver protein extracts from WT and -knockout mice confirming the absence of Atg4b protein in mutant mice. β-Actin was used as a loading control.