Sex in mammals is genetically determined and is defined at the cellular level by sex chromosome complement (XY males and XX females). The Y chromosome–linked gene sex-determining region Y (SRY) is believed to be the master initiator of male sex determination in almost all eutherian and metatherian mammals, functioning to upregulate expression of its direct target gene Sry-related HMG box–containing gene 9 (SOX9). Data suggest that SRY evolved from SOX3, although there is no direct functional evidence to support this hypothesis. Indeed, loss-of-function mutations in SOX3 do not affect sex determination in mice or humans. To further investigate Sox3 function in vivo, we generated transgenic mice overexpressing Sox3. Here, we report that in one of these transgenic lines, Sox3 was ectopically expressed in the bipotential gonad and that this led to frequent complete XX male sex reversal. Further analysis indicated that Sox3 induced testis differentiation in this particular line of mice by upregulating expression of Sox9 via a similar mechanism to Sry. Importantly, we also identified genomic rearrangements within the SOX3 regulatory region in three patients with XX male sex reversal. Together, these data suggest that SOX3 and SRY are functionally interchangeable in sex determination and support the notion that SRY evolved from SOX3 via a regulatory mutation that led to its de novo expression in the early gonad.

XX Tg/+ gonads have a normal male appearance and express the transgene at 13.5 dpc. 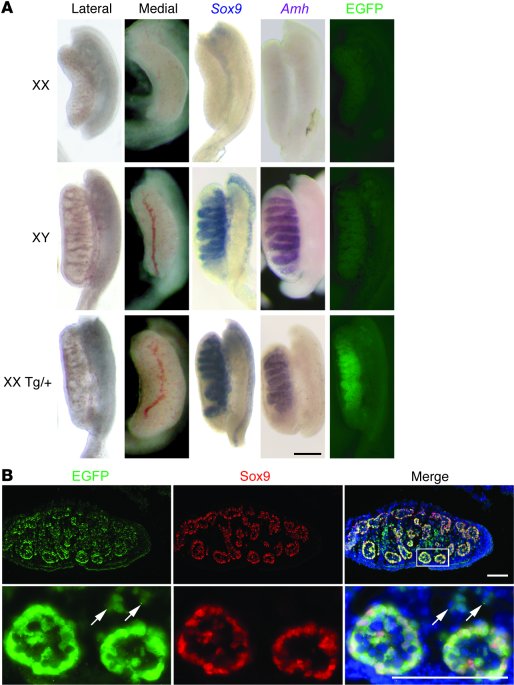