US28 is a constitutively active chemokine receptor encoded by CMV (also referred to as human herpesvirus 5), a highly prevalent human virus that infects a broad spectrum of cells, including intestinal epithelial cells (IECs). To study the role of US28 in vivo, we created transgenic mice (VS28 mice) in which US28 expression was targeted to IECs. Expression of US28 was detected in all IECs of the small and large intestine, including in cells expressing leucine rich repeat containing GPCR5 (Lgr5), a marker gene of intestinal epithelial stem cells. US28 expression in IECs inhibited glycogen synthase 3β (GSK-3β) function, promoted accumulation of β-catenin protein, and increased expression of Wnt target genes involved in the control of the cell proliferation. VS28 mice showed a hyperplastic intestinal epithelium and, strikingly, developed adenomas and adenocarcinomas by 40 weeks of age. When exposed to an inflammation-driven tumor model (azoxymethane/dextran sodium sulfate), VS28 mice developed a significantly higher tumor burden than control littermates. Transgenic coexpression of the US28 ligand CCL2 (an inflammatory chemokine) increased IEC proliferation as well as tumor burden, suggesting that the oncogenic activity of US28 can be modulated by inflammatory factors. Together, these results indicate that expression of US28 promotes development of intestinal dysplasia and cancer in transgenic mice and suggest that CMV infection may facilitate development of intestinal neoplasia in humans.

Expression of the US28 transgene in mice. 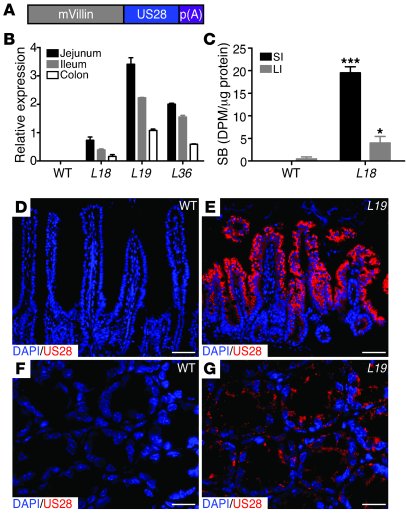