Several lines of evidence suggest that tumor cells show elevated activity of the NF-κB transcription factor, a phenomenon often resulting from constitutive activity of IκB kinase β (IKKβ). However, others have found that loss of NF-κB activity or IKKβ is tumor promoting. The role of NF-κB in tumor progression is therefore controversial and varies with tumor type. We sought to more extensively investigate the role IKKβ in melanoma tumor development by specifically disrupting Ikkb in melanocytes in an established mouse model of spontaneous melanoma, whereby HRasV12 is expressed in a melanocyte-specific, doxycycline-inducible manner in mice null for the gene encoding the tumor suppressor inhibitor cyclin-dependent kinase 4/alternative reading frame (Ink4a/Arf). Our results show that Ink4a/Arf–/– mice with melanocyte-specific deletion of Ikkb were protected from HRasV12-initiated melanoma only when p53 was expressed. This protection was accompanied by cell cycle arrest, with reduced cyclin-dependent kinase 2 (Cdk2), Cdk4, Aurora kinase A, and Aurora kinase B expression. Increased p53-mediated apoptosis was also observed, with decreased expression of the antiapoptotic proteins Bcl2 and survivin. Enhanced stabilization of p53 involved increased phosphorylation at Ser15 and reduced phosphorylation of double minute 2 (Mdm2) at Ser166. Together, our findings provide genetic and mechanistic evidence that mutant HRas initiation of tumorigenesis requires Ikkβ-mediated NF-κB activity.

Generation of Ikkβ knockout mice and characterization of Ikkβ-depleted melanocytes of mice. 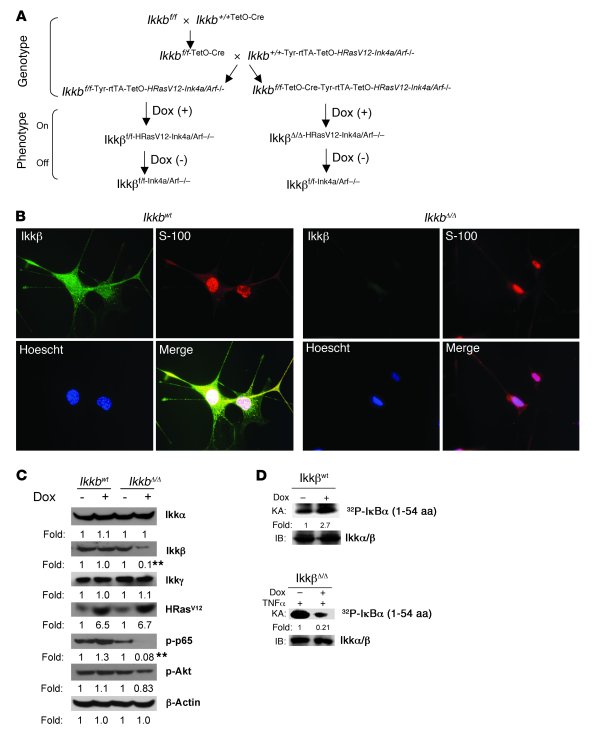 () mice crossed with TetOn-Cre mice resulted in the strain of mice. These mice were further interbred to obtain the additional genetic background of , , and melanocyte-specific Tyr-rtTA. These mice were named Δ/Δ mice, and their counterparts lacking TetOn-Cre were used as control mice. On refers to tetracycline/doxycycline-inducible expression of Cre and/or gene in the TetOn system. Off refers to absence of Cre and/or -inducible gene expression when tetracycline/doxycycline is absent. () E19 melanocytes isolated from and Δ/Δ mice were treated with doxycycline (Dox) and stained with specific antibodies to Ikkβ (green) or S-100 (red), and nuclei were counterstained with Hoechst (blue). Original magnification, ×40. () Expression of the indicated proteins and their phosphorylation status were analyzed by immunoblotting, after the above cells were treated or not treated with doxycycline. Blot band densities from cultures treated with doxycycline were quantitated and normalized to the blot band density from cells of the same genetic background without doxycycline-induced HRasV12 expression. The fold change (fold) represents the value of 3 independent experiments and was statistically analyzed. ** < 0.01. () Cellular Ikk kinase activity (KA) was examined in vitro by monitoring phosphorylation of the GST-IκB (aa 1–54) substrate by the immunoprecipitated Ikk complex. 32P-labeled–Iκbα (32P-Iκbα) indicates phosphorylated GST-IκB (aa 1–54). Fold indicates the ratio of the immunoblotted protein band density from the doxycycline-treated culture to the without doxycycline treatment control.