The liver serves as a target organ for several important pathogens, including hepatitis B and C viruses (HBV and HCV, respectively) and the human malaria parasites, all of which represent serious global health problems. Because these pathogens are restricted to human hepatocytes, research in small animals has been compromised by the frailty of the current mouse xenotransplantation models. In this issue of the JCI, Bissig et al. demonstrate robust HBV and HCV infection in a novel xenotransplantation model in which large numbers of immunodeficient mice with liver injury were engrafted with significant quantities of human hepatocytes. This technical advance paves the way for more widespread use of human liver chimeric mice and forms the basis for creating increasingly complex humanized mouse models that could prove useful for studying immunopathogenesis and vaccine development against hepatotropic pathogens. 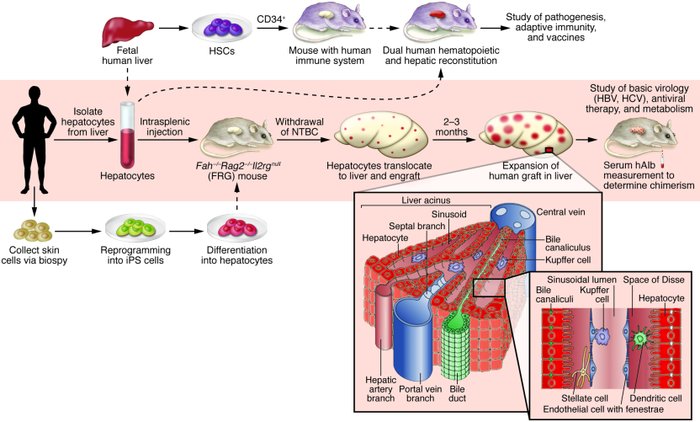 In the model described in the current issue by Bissig et al. (), enclosed in the shaded rectangle, hepatocytes are isolated from adult human liver tissue and injected into FRG mice that are cycled off the protective drug NTBC. Human hepatocyte engraftment levels are then monitored by serial human albumin (hAlb) measurements in the serum of transplanted mice. Over 2–3 months, the human hepatocytes expand and can repopulate up to 97% of the FRG mouse liver, with the remainder of liver-resident cells likely of murine origin. This robust system can be used to study HBV and HCV infections in vivo and can serve as a scaffold for more complex humanized mouse models. The engrafted FRG mice reported by Bissig et al. could potentially be combined with mice bred to posses a human immune system, which are generated by transplantation of human CD34+ stem cells (HSCs) (). Use of donor hepatocytes and HSCs derived from fetal liver may allow FRG mice animals to be repopulated with the immune system and liver tissue of an individual human donor, facilitating studies of immunopathogenesis and vaccine testing. Another use for the FRG model will be to study hepatocyte differentiation from human induced pluripotent stem (iPS) cells (, ) derived from dermal fibroblasts or from embryonic stem cells (). Steps depicted by solid lines are currently feasible; the dashed lines refer to steps that are under investigation but have not yet proven workable. Figure modified with permission from (), (), and () and based on concepts discussed in ref. .