Hypermethylation-mediated tumor suppressor gene silencing plays a crucial role in tumorigenesis. Understanding its underlying mechanism is essential for cancer treatment. Previous studies on human N-α-acetyltransferase 10, NatA catalytic subunit (hNaa10p; also known as human arrest-defective 1 [hARD1]), have generated conflicting results with regard to its role in tumorigenesis. Here we provide multiple lines of evidence indicating that it is oncogenic. We have shown that hNaa10p overexpression correlated with poor survival of human lung cancer patients. In vitro, enforced expression of hNaa10p was sufficient to cause cellular transformation, and siRNA-mediated depletion of hNaa10p impaired cancer cell proliferation in colony assays and xenograft studies. The oncogenic potential of hNaa10p depended on its interaction with DNA methyltransferase 1 (DNMT1). Mechanistically, hNaa10p positively regulated DNMT1 enzymatic activity by facilitating its binding to DNA in vitro and its recruitment to promoters of tumor suppressor genes, such as E-cadherin, in vivo. Consistent with this, interaction between hNaa10p and DNMT1 was required for E-cadherin silencing through promoter CpG methylation, and E-cadherin repression contributed to the oncogenic effects of hNaa10p. Together, our data not only establish hNaa10p as an oncoprotein, but also reveal that it contributes to oncogenesis through modulation of DNMT1 function.

The oncogenic potential of hNaa10p depends on its binding to DNMT1. 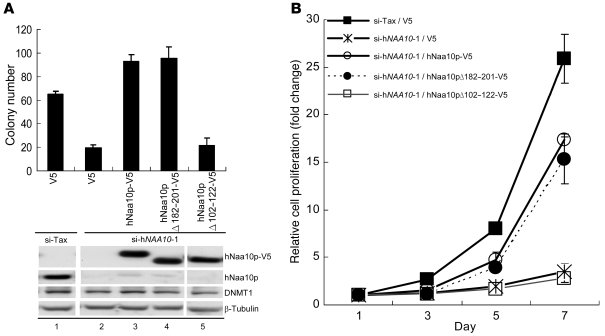 ( and ) si-h-1–treated H1299 cells expressing the resistant V5-tagged WT or mutant hNaa10p lacking aa 182–201 or aa 102–122 were subjected to soft agar assay and Western blot () as well as cell proliferation study (). Data are mean ± SD from 3 independent assays. Lanes in were run on the same gel but were noncontiguous (white lines).