HDL has anti-atherogenic properties, and plasma levels of HDL cholesterol correlate inversely with risk of coronary artery disease. HDL reportedly functions as a cofactor to the anticoagulant activated protein C (APC) in the degradation of factor Va (FVa). The aim of the present study was to elucidate the mechanism by which HDL functions as cofactor to APC. Consistent with a previous report, HDL isolated from human plasma by ultracentrifugation was found to stimulate APC-mediated degradation of FVa. However, further purification of HDL by gel filtration revealed that the stimulating activity was not a property of HDL. Instead, the stimulating activity eluted completely separately from HDL in the high-molecular-weight void volume fractions. The active portion of these fractions stimulated FVa degradation by APC and supported the assembly of factor Xa and FVa into a functional prothrombinase complex. Both the procoagulant and anticoagulant activities were blocked by addition of annexin V, suggesting that the active portion was negatively charged phospholipid membranes. These results demonstrate that HDL does not stimulate the APC/protein S effect and that the activity previously reported to be a property of HDL is instead caused by contaminating negatively charged phospholipid membranes.

Anti- and procoagulant activities of HDL prepared by ultracentrifugation. 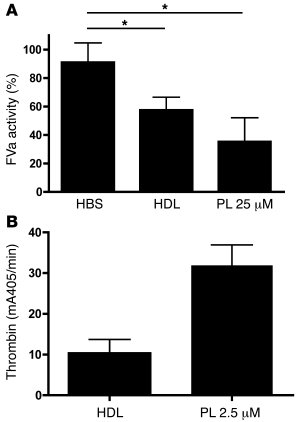 () HDL (final concentrations of 2 mg/ml and 680 μM choline-phospholipids) was tested in a FVa inactivation assay including 20 pM FVa, 0.5 nM APC, and 14.5 nM protein S. After 30 minutes incubation, the FVa activity was measured in a prothrombinase assay. Liposomes (10:20:70 PS/PE/PC) at 25 μM and HBS buffer were used as positive and negative controls, respectively. Values are expressed as percent of controls without APC. () HDL (final concentrations of 1 mg/ml and 340 μM choline-phospholipids) were added to a prothrombinase assay containing 2.5 nM FXa, 210 pM FVa, and 0.5 μM prothrombin. After 2 minutes incubation at 37°C, the reaction was stopped, and the amount of thrombin formed was determined as described in Methods. Liposomes (10:40:50 PS/PE/PC) at a concentration of 2.5 μM were used as positive control. Values are expressed as mean ± SD from repeated experiments ( = 3). Significance was determined by unpaired test (* < 0.05). mA405/min, milliabsorbance at 405 nm/min. PL, phospholipids.