The majority of human skeletal dysplasias are caused by dysregulation of growth plate homeostasis. As TGF-β signaling is a critical determinant of growth plate homeostasis, skeletal dysplasias are often associated with dysregulation of this pathway. The context-dependent action of TFG-β signaling is tightly controlled by numerous mechanisms at the extracellular level and downstream of ligand-receptor interactions. However, TGF-β is synthesized as an inactive precursor that is cleaved to become mature in the Golgi apparatus, and the regulation of this posttranslational intracellular processing and trafficking is much less defined. Here, we report that a cysteine-rich protein, E-selectin ligand–1 (ESL-1), acts as a negative regulator of TGF-β production by binding TGF-β precursors in the Golgi apparatus in a cell-autonomous fashion, inhibiting their maturation. Furthermore, ESL-1 inhibited the processing of proTGF-β by a furin-like protease, leading to reduced secretion of mature TGF-β by primary mouse chondrocytes and HEK293 cells. In vivo loss of Esl1 in mice led to increased TGF-β/SMAD signaling in the growth plate that was associated with reduced chondrocyte proliferation and delayed terminal differentiation. Gain-of-function and rescue studies of the Xenopus ESL-1 ortholog in the context of early embryogenesis showed that this regulation of TGF-β/Nodal signaling was evolutionarily conserved. This study identifies what we believe to be a novel intracellular mechanism for regulating TGF-β during skeletal development and homeostasis. 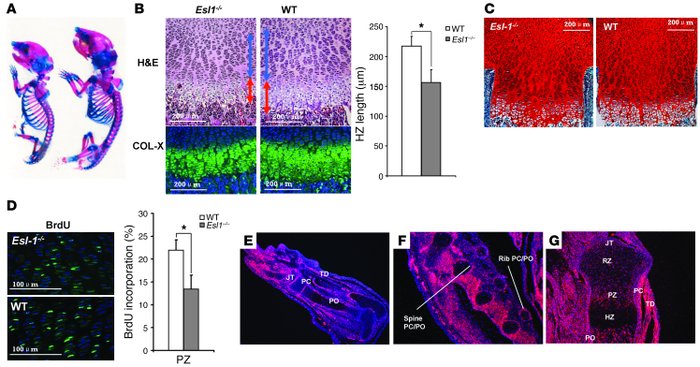 () Skeletal preparation (Alcian blue and alizarin red staining) of P3 WT (right) and (left) mice. () H&E staining of P1 WT and femur sections. Blue arrows indicate PZ; red arrows, HZ. The lengths of the HZ were separately confirmed by type X collagen (COL-X) immunofluorescence and quantified ( = 5). () Safranin O staining on P3 femur sections showing increased ECM deposition on mutant growth plate. () chondrocytes in the P1 PZ of femurs show decreased proliferation compared with WT chondrocytes ( = 12) by BrdU incorporation assay. (–) In situ hybridization of RNA probe in the skeletal tissues. At E16.5, is highly expressed in perichondrium (PC), periosteum (PO), surface of joints (JT), tendons (TD) in the limb (), PC and PO of rib and vertebrate (). () In P1 limb, is highly expressed in PC, PO, JT, and the PZ of cartilage, but less so in the RZ and HZ. * < 0.05.