Metastatic breast cancer is the major cause of cancer-related death among women in the Western world. Invasive carcinoma cells are able to counteract apoptotic signals in the absence of anchorage, enabling cell survival during invasion and dissemination. Although loss of E-cadherin is a cardinal event in the development and progression of invasive lobular carcinoma (ILC), little is known about the underlying mechanisms that govern these processes. Using a mouse model of human ILC, we show here that cytosolic p120-catenin (p120) regulates tumor growth upon loss of E-cadherin through the induction of anoikis resistance. p120 conferred anchorage independence by indirect activation of Rho/Rock signaling through interaction and inhibition of myosin phosphatase Rho–interacting protein (Mrip), an antagonist of Rho/Rock function. Consistent with these data, primary human ILC samples expressed hallmarks of active Rock signaling, and Rock controlled the anoikis resistance of human ILC cells. Thus, we have linked loss of E-cadherin — an initiating event in ILC development — to Rho/Rock-mediated control of anchorage-independent survival. Because activation of Rho and Rock are strongly linked to cancer progression and are susceptible to pharmacological inhibition, these insights may have clinical implications for the development of tailor-made intervention strategies to better treat invasive and metastatic lobular breast cancer.

Model for p120-mediated regulation of anoikis resistance in ILC upon loss of E-cadherin. 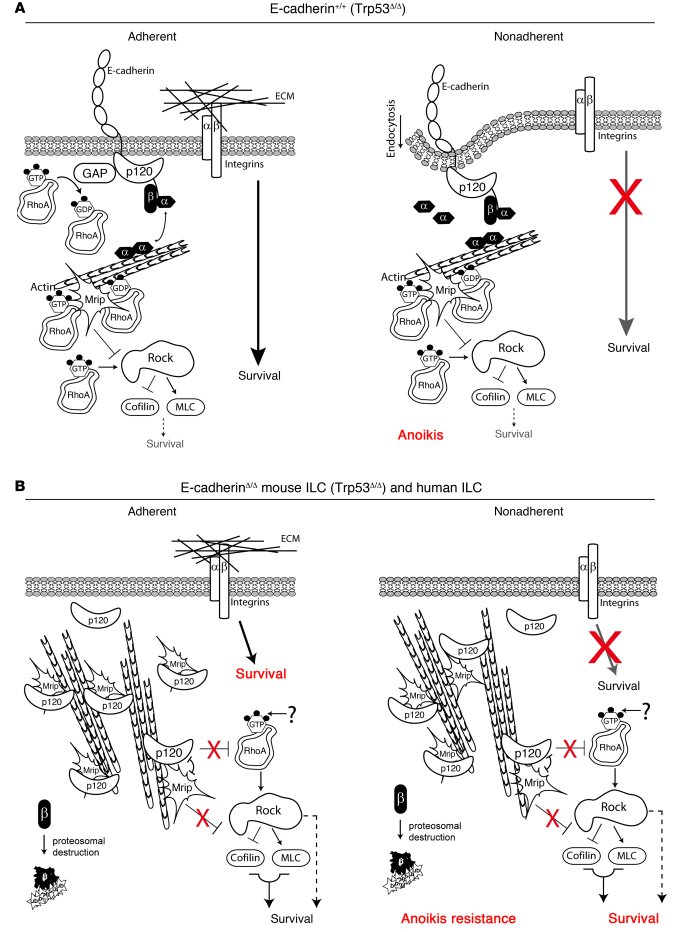 () Under benign conditions and in the presence of a functional AJ, Rho levels and cellular survival mechanisms are balanced through a fine-tuned equilibrium of protein interactions and signaling pathways (left). When cells are deprived of ECM-integrin interactions, a potent outside-in survival signal is impeded, resulting in anoikis because of a lack of compensatory survival mechanisms (right). () Upon early mutational inactivation of E-cadherin in human ILC and mILC (Cdh1Δ/Δ;Trp53Δ/Δ), the AJ is disassembled, resulting in proteasomal degradation of β-catenin. More importantly, p120 translocates to the cytosol, where it binds Mrip, an antagonist of Rho/Rock function. Since p120 has RhoGDI functions, this interaction will alleviate the inhibitory functions of both p120 and Mrip, leading to active Rho/Rock signaling by an unknown mechanism. Although activation of Rho and Rock may have a positive effect on cellular survival in the presence of ECM, these signals will be overridden by powerful integrin-mediated survival cues (left). However, when ILC cells transfer to anchorage independence, the survival signals that emanate from Rho and Rock will rescue the cells, leading to anoikis resistance of ILC (right).