The classical view of ovarian follicle development is that it is regulated by the hypothalamic-pituitary-ovarian axis, in which gonadotropin-releasing hormone (GnRH) controls the release of the gonadotropic hormones follicle-stimulating hormone (FSH) and luteinizing hormone (LH), and that ovarian steroids exert both negative and positive regulatory effects on GnRH secretion. More recent studies in mice and humans indicate that many other intra-ovarian signaling cascades affect follicular development and gonadotropin action in a stage- and context-specific manner. As we discuss here, mutant mouse models and clinical evidence indicate that some of the most powerful intra-ovarian regulators of follicular development include the TGF-β/SMAD, WNT/FZD/β-catenin, and RAS/ERK1/2 signaling pathways and the FOXO/FOXL2 transcription factors.

Summary of hormonal control of the ovary during follicle growth, ovulation, and luteinization. 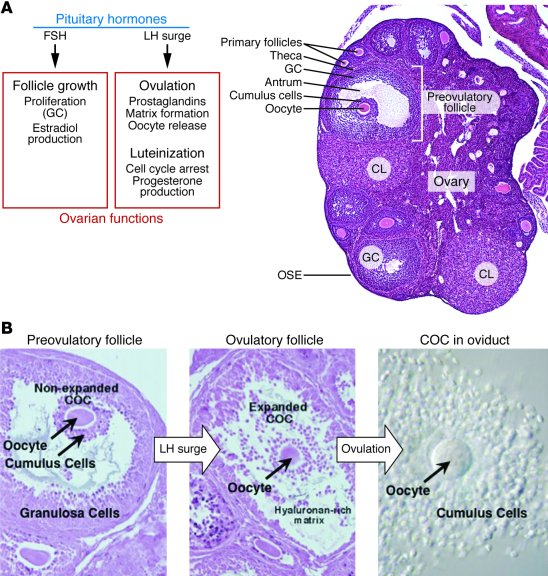 () Left: The pituitary gonadotropins FSH and LH are part of the hypothalamic-pituitary-gonadal axis that coordinately regulates the menstrual (in humans) or estrous (in nonhuman mammals) cycle by extensive feedback loops. FSH controls follicular granulosa cell (GC) growth and estradiol production, while LH controls ovulation and follicular luteinization. Right: A cross section of a mouse ovary is shown, demonstrating the main cell types and follicle stages. Ovarian follicles are composed of a single oocyte surrounded by somatic cells (granulosa cells) and thecal cells. Follicles grow from primordial (not shown) to primary and secondary stages independent of the pituitary gonadotropins. FSH stimulates growth to the preovulatory follicle stage, characterized by granulosa cells that directly surround the oocyte (cumulus cells) and those that make up the bulk of the wall of the follicle. Following the LH surge, the follicle erupts through the ovarian surface (OSE), and the remaining cells of the follicle terminally differentiate to form a corpus luteum. Original magnification, ×5. () Ovulation in the mouse. Left: The preovulatory follicle contains an oocyte surrounded by cumulus cells that are separated from the mural granulosa cells by a fluid-filled cavity. Middle: Following the LH surge, the COC undergoes a process called cumulus or COC expansion, in which the cumulus cells make and become embedded in a hyaluronan-rich matrix. Right: The cumulus cells accompany the oocyte into the oviduct following release of the entire COC from the ovarian follicle.Original magnification, ×40.