Anion transport by the colonic mucosa maintains the hydration and pH of the colonic lumen, and its disruption causes a variety of diarrheal diseases. Cholinergic agonists raise cytosolic Ca2+ levels and stimulate anion secretion, but the mechanisms underlying this effect remain unclear. Cholinergic stimulation of anion secretion may occur via activation of Ca2+-activated Cl– channels (CaCCs) or an increase in the Cl– driving force through CFTR after activation of Ca2+-dependent K+ channels. Here we investigated the role of a candidate CaCC protein, bestrophin-2 (Best2), using Best2–/– mice. Cholinergic stimulation of anion current was greatly reduced in Best2–/– mice, consistent with our proposed role for Best2 as a CaCC. However, immunostaining revealed Best2 localized to the basolateral membrane of mucin-secreting colonic goblet cells, not the apical membrane of Cl–-secreting enterocytes. In addition, in the absence of HCO3–, cholinergic-activated current was identical in control and Best2–/– tissue preparations, which suggests that most of the Best2 current was carried by HCO3–. These data delineate an alternative model of cholinergic regulation of colonic anion secretion in which goblet cells play a critical role in HCO3– homeostasis. We therefore propose that Best2 is a HCO3– channel that works in concert with a Cl:HCO3– exchanger in the apical membrane to affect transcellular HCO3– transport. Furthermore, previous models implicating CFTR in cholinergic Cl– secretion may be explained by substantial downregulation of Best2 in Cftr–/– mice.

Localization of Best2 in mouse and human colon. 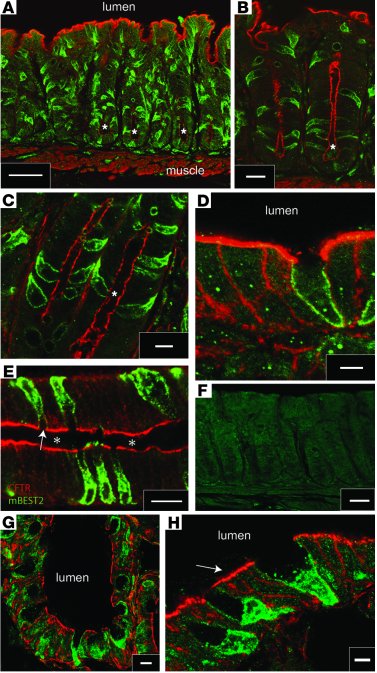 Frozen sections of paraformaldehyde-fixed mouse (–) and human ( and ) distal colon were stained with antibody against Best2 (green) and counterstained with phalloidin to stain actin (–, , and ; red) or antibody against CFTR (; red). () Low-power longitudinal section showing Best2-positive cells scattered throughout the crypt. Asterisks denote the base of the lumen of several crypts. (–) Higher-magnification view of crypts (asterisks denote lumen) showing Best2 localization in the basolateral membrane of a subset of cells. () CFTR and Best2 antibodies stained different cell types in the crypt. The apical membrane of enterocytes in the crypt (asterisks denote lumen) stained with CFTR antibody, whereas Best2 antibody stained the basolateral membrane of CFTR-negative cells. () Specificity of Best2 antibody staining was demonstrated by its absence in mice. ( and ) Low- and high-power views of BEST2-positive cells in human colon. Arrow indicates brush border membrane. BEST2 staining was evident on basolateral membranes and also in intracellular organelles. Scale bars: 50 μm ( and ); 20 μm (); 10 μm (, , and ); 5 μm ( and ).