Inappropriate excess of the steroid hormone aldosterone, which is a mineralocorticoid receptor (MR) agonist, is associated with increased inflammation and risk of cardiovascular disease. MR antagonists are cardioprotective and antiinflammatory in vivo, and evidence suggests that they mediate these effects in part by aldosterone-independent mechanisms. Here we have shown that MR on myeloid cells is necessary for efficient classical macrophage activation by proinflammatory cytokines. Macrophages from mice lacking MR in myeloid cells (referred to herein as MyMRKO mice) exhibited a transcription profile of alternative activation. In vitro, MR deficiency synergized with inducers of alternatively activated macrophages (for example, IL-4 and agonists of PPARγ and the glucocorticoid receptor) to enhance alternative activation. In vivo, MR deficiency in macrophages mimicked the effects of MR antagonists and protected against cardiac hypertrophy, fibrosis, and vascular damage caused by L-NAME/Ang II. Increased blood pressure and heart rates and decreased circadian variation were observed during treatment of MyMRKO mice with L-NAME/Ang II. We conclude that myeloid MR is an important control point in macrophage polarization and that the function of MR on myeloid cells likely represents a conserved ancestral MR function that is integrated in a transcriptional network with PPARγ and glucocorticoid receptor. Furthermore, myeloid MR is critical for blood pressure control and for hypertrophic and fibrotic responses in the mouse heart and aorta. 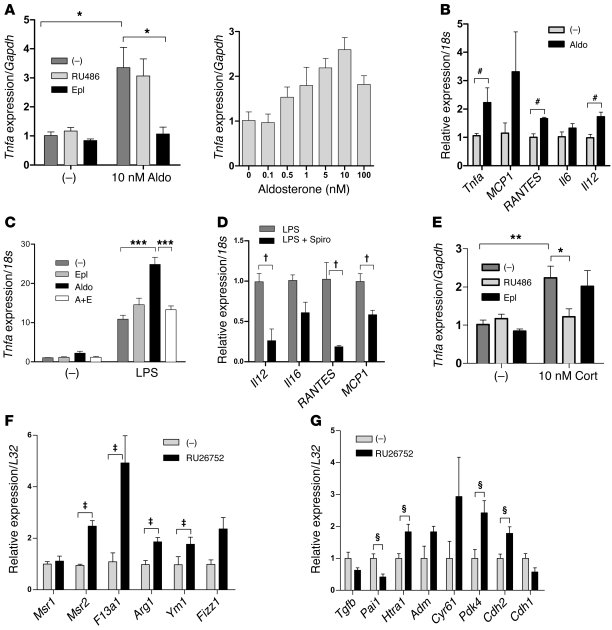