Thrombotic thrombocytopenic purpura (TTP) is a life-threatening disease characterized by systemic microvascular thrombosis caused by adhesion of platelets to ultra-large vWF (ULVWF) multimers. These multimers accumulate because of a deficiency of the processing enzyme ADAMTS13. vWF protein forms long multimers from homodimers that first form through C-terminal disulfide bonds and then join through their N termini by further disulfide bonding. N-acetylcysteine (NAC) is an FDA-approved drug that has long been used to treat chronic obstructive lung disease and acetaminophen toxicity and is known to function in the former disorder by reducing mucin multimers. Here, we examined whether NAC could reduce vWF multimers, which polymerize in a manner similar to mucins. In vitro, NAC reduced soluble plasma-type vWF multimers in a concentration-dependent manner and rapidly degraded ULVWF multimer strings extruded from activated ECs. The effect was preceded by reduction of the intrachain disulfide bond encompassing the platelet-binding A1 domain. NAC also inhibited vWF-dependent platelet aggregation and collagen binding. Injection of NAC into ADAMTS13-deficient mice led to the rapid resolution of thrombi produced by ionophore treatment of the mesenteric venules and reduced plasma vWF multimers. These results suggest that NAC may be a rapid and effective treatment for patients with TTP.

Effect of NAC on platelet–vWF strings under flow. 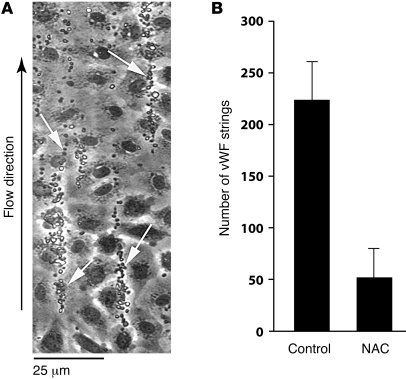 () Platelets adherent to vWF strings secreted from, and anchored to, histamine-stimulated HUVECs are marked with arrows. () Quantification of the platelet-vWF strings. The number of platelet-vWF strings after perfusion with 40 mM NAC was 23% of the untreated control ( < 0.001). Mean values of string number with SD from 5–9 experiments are shown. The data were analyzed using Student’s test.