Tropomyosin-related kinase receptor C (TrkC) is a neurotrophin receptor with tyrosine kinase activity that was expected to be oncogenic. However, it has several characteristics of a tumor suppressor: its expression in tumors has often been associated with good prognosis; and it was recently demonstrated to be a dependence receptor, transducing different positive signals in the presence of ligand but inducing apoptosis in the absence of ligand. Here we show that the TrkC ligand neurotrophin-3 (NT-3) is upregulated in a large fraction of aggressive human neuroblastomas (NBs) and that it blocks TrkC-induced apoptosis of human NB cell lines, consistent with the idea that TrkC is a dependence receptor. Functionally, both siRNA knockdown of NT-3 expression and incubation with a TrkC-specific blocking antibody triggered apoptosis in human NB cell lines. Importantly, disruption of the NT-3 autocrine loop in malignant human neuroblasts triggered in vitro NB cell death and inhibited tumor growth and metastasis in both a chick and a mouse xenograft model. Thus, we believe that our data suggest that NT-3/TrkC disruption is a putative alternative targeted therapeutic strategy for the treatment of NB.

NT-3 is expressed in a large fraction of stage 4 NBs. 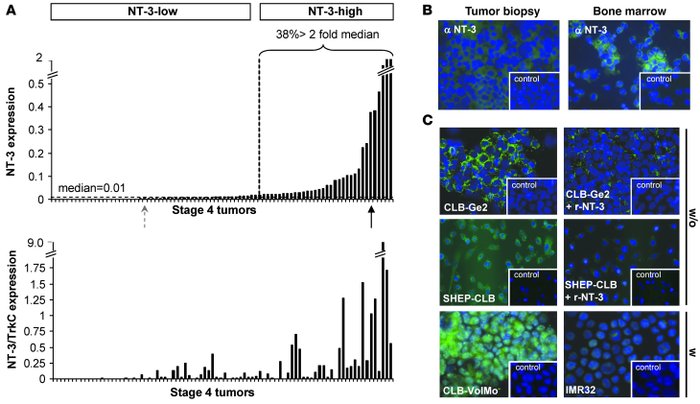 () NT-3 expression and NT-3/TrkC ratio measured by Q-RT-PCR on total RNA from tumors from a total of 86 stage 4 NB patients. The percentage of tumors expressing NT-3 at more than 2 fold of the value corresponding to the median is indicated. NT-3-low, tumors with low levels of NT-3 expression; NT-3-high, tumors with high levels of NT-3 expression. () Representative NT-3 immunohistochemistry on a tumor biopsy and bone marrow dissociated cells from low (left panel) and high (right panel) NT-3–expressing stage 4 patients, corresponding to the dotted gray arrow and black arrow in , respectively. () Representative NT-3 immunohistochemistry on CLB-Ge2, SHEP-CLB, CLB-VolMo, and IMR32 cells. CLB-Ge2 and SHEP-CLB NT-3 immunostaining, when an excess of recombinant NT-3 (r-NT-3) is added with primary antibody, is also shown. Note that the 4 top panels show immunohistochemistry performed in absence of membrane permeabilization (w/o), while the immunohistochemistry shown in 2 bottom panels was performed after cell permeabilization with Triton X-100 (w). ( and ) Insets depict control without primary antibody. Original magnification, ×32.