Intratumor genetic heterogeneity is a key mechanism underlying tumor progression and therapeutic resistance. The prevailing model for explaining intratumor diversity, the clonal evolution model, has recently been challenged by proponents of the cancer stem cell hypothesis. To investigate this issue, we performed combined analyses of markers associated with cellular differentiation states and genotypic alterations in human breast carcinomas and evaluated diversity with ecological and evolutionary methods. Our analyses showed a high degree of genetic heterogeneity both within and between distinct tumor cell populations that were defined based on markers of cellular phenotypes including stem cell–like characteristics. In several tumors, stem cell–like and more-differentiated cancer cell populations were genetically distinct, leading us to question the validity of a simple differentiation hierarchy–based cancer stem cell model. The degree of diversity correlated with clinically relevant breast tumor subtypes and in some tumors was markedly different between the in situ and invasive cell populations. We also found that diversity measures were associated with clinical variables. Our findings highlight the importance of genetic diversity in intratumor heterogeneity and the value of analyzing tumors as distinct populations of cancer cells to more effectively plan treatments. 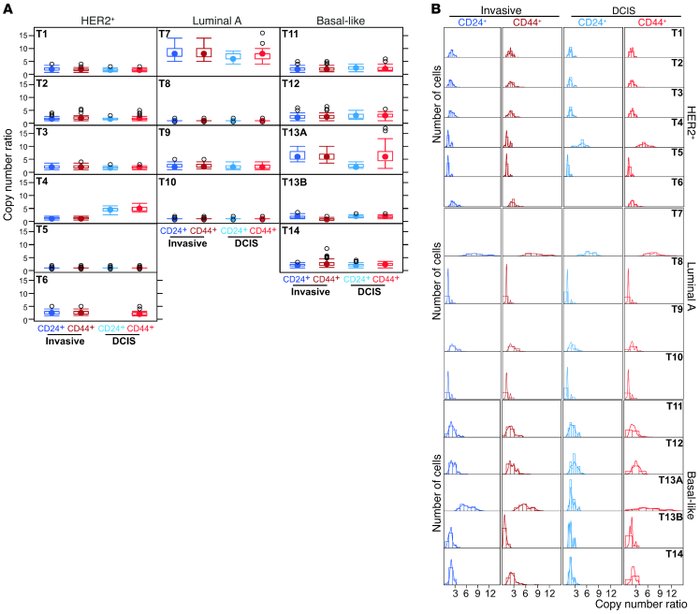 In basal-like tumors, CD24+ corresponds to CD44– cells, because no CD24 expression is seen in these cases. () Box plots depicting the distribution of 8q24 copy number gain defined as the ratio of signal observed for the 8q24-specific and centromeric probes in 100 individual cells in each of the 4 indicated tumor cell subpopulations. The filled circle represents the mean; boxes show the 25th to 75th percentiles; the horizontal lines inside the boxes represent the median; whiskers extend to the 10th and 90th percentiles; and outlying black circles are individual data points outside the 10th and 90th percentiles. Differences are seen between cell populations and also progression stages both for median copy number gain and for range of distribution. () Histograms and kernel density estimates depicting the distribution of cells with the indicated copy number ratio. Differences are seen between DCIS and invasive areas of the same tumor (e.g., tumor 4 [T4]) and also between CD24+ and CD44+ cells within the same compartment (e.g., T13A).