Homeobox (Hox) genes encode transcription factors that act as critical regulators of growth and differentiation during embryogenesis. While many studies have identified increased expression of Hox genes in tumors, much less is known about the mechanistic basis by which Hox genes facilitate tumor development. In this issue of the JCI, McCoy and colleagues show that transgenic mice that express the homeoprotein Six1 in mammary epithelial cells show increases in stem/progenitor cell populations and subsequent tumor development, while in a separate study Micalizzi and colleagues show that overexpression of Six1 facilitates breast cancer cell metastasis by inducing epithelial-mesenchymal transition (EMT) (see the related articles beginning on pages 2663 and 2678, respectively). Their findings implicate Six1 as a central mediator of breast cancer development.

Mammary tumor growth and metastasis is induced by overexpression of Six1. 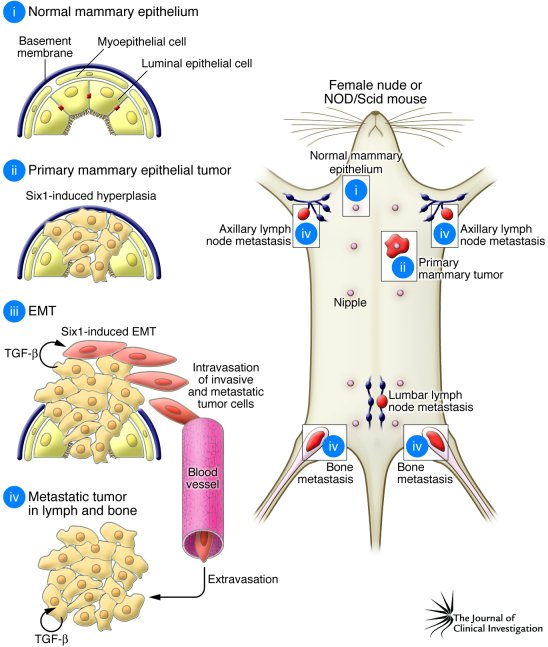 (i) Normal mammary epithelium consists of a bilayered epithelial structure of myoepithelial and luminal epithelial cells, surrounded by a continuous basement membrane. (ii) In their study in this issue of the , McCoy et al. () show that transgenic mice that express Six1 under control of the mouse mammary tumor virus show induction of mammary ductal hyperplasia and growth of mammary tumors. Micalizzi et al. () in their study show that overexpression of Six1 in cultured human mammary epithelial cells leads to induction of EMT through stimulation of the TGF-β receptor and that, following xenograft implantation in immune-compromised mice, Six1-induced EMT facilitates tissue invasion and spread of these cells to the vasculature (iii) and formation of metastases in the lymph and bone (iv).