Type 1 diabetes develops when most insulin-producing β cells of the pancreas are killed by an autoimmune attack. The in vivo conditions modulating the sensitivity and resistance of β cells to this attack remain largely obscure. Here, we show that connexin 36 (Cx36), a trans-membrane protein that forms gap junctions between β cells in the pancreatic islets, protects mouse β cells against both cytotoxic drugs and cytokines that prevail in the islet environment at the onset of type 1 diabetes. We documented that this protection was at least partially dependent on intercellular communication, which Cx36 and other types of connexin channels establish within pancreatic islets. We further found that proinflammatory cytokines decreased expression of Cx36 and that experimental reduction or augmentation of Cx36 levels increased or decreased β cell apoptosis, respectively. Thus, we conclude that Cx36 is central to β cell protection from toxic insults.

Mice lacking Cx36 are sensitized to the toxic effects of STZ and AX. 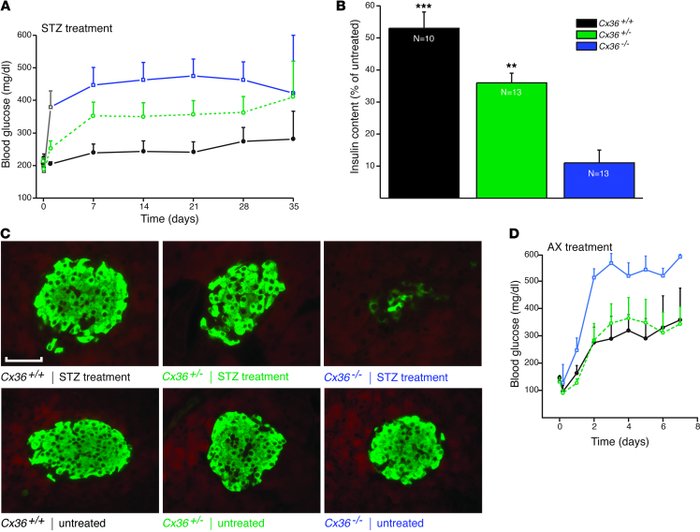 () A single injection of 200 mg/kg STZ induced mild hyperglycemia in control mice (black; = 9). This hyperglycemia was more pronounced in (green; = 14) and (blue; = 14) littermates, which expressed reduced and nil doses, respectively, of the gene. () 5 weeks after STZ injection, pancreatic insulin content was highest in control mice, lowest in mice, and intermediate in mice. Values are expressed as percent of untreated; as indicated. ** < 0.01, *** < 0.001 versus . () At the same time point, the proportion of surviving β cells, identified by insulin immunostaining, was highest in , lowest in , and intermediate in mice. Compared with insulin staining of corresponding untreated mice, STZ-treated mice revealed major loss of β cells. Scale bar: 120 μm. () A single injection of 60 mg/kg AX induced sustained hyperglycemia in (black; = 4) and (green; = 4) mice. This hyperglycemia was significantly more pronounced in littermates (blue; = 5). All data are mean ± SEM.