Activated protein C (APC), the only FDA-approved biotherapeutic drug for sepsis, possesses anticoagulant, antiinflammatory, and barrier-protective activities. However, the mechanisms underlying its anti­inflammatory functions are not well defined. Here, we report that the antiinflammatory activity of APC on macrophages is dependent on integrin CD11b/CD18, but not on endothelial protein C receptor (EPCR). We showed that CD11b/CD18 bound APC within specialized membrane microdomains/lipid rafts and facilitated APC cleavage and activation of protease-activated receptor–1 (PAR1), leading to enhanced production of sphingosine-1-phosphate (S1P) and suppression of the proinflammatory response of activated macrophages. Deletion of the γ-carboxyglutamic acid domain of APC, a region critical for its anticoagulant activity and EPCR-dependent barrier protection, had no effect on its antiinflammatory function. Genetic inactivation of CD11b, PAR1, or sphingosine kinase–1, but not EPCR, abolished the ability of APC to suppress the macrophage inflammatory response in vitro. Using an LPS-induced mouse model of lethal endotoxemia, we showed that APC administration reduced the mortality of wild-type mice, but not CD11b-deficient mice. These data establish what we believe to be a novel mechanism underlying the antiinflammatory activity of APC in the setting of endotoxemia and provide clear evidence that the antiinflammatory function of APC is distinct from its barrier-protective function and anticoagulant activities.

The efficacy of APC as an antiendotoxemia/sepsis drug in vivo is dependent on CD11b/CD18. 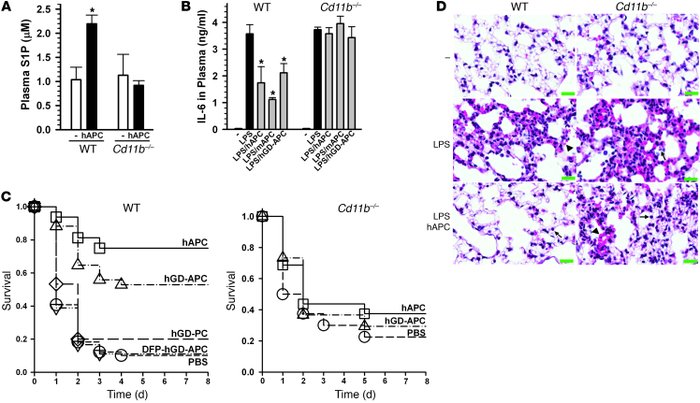