HSCs are BM-derived, self-renewing multipotent cells that develop into circulating blood cells. They have been implicated in the repair of inflamed parenchymal tissue, but the signals that regulate their trafficking to sites of inflammation are unknown. As monocytes are recruited to sites of inflammation via chemoattractants that activate CCR2 on their surface, we investigated whether HSCs are also recruited to sites of inflammation through CCR2. Initial analysis indicated that in mice, CCR2 was expressed on subsets of HSCs and hematopoietic progenitor cells (HPCs) and that freshly isolated primitive hematopoietic cells (Lin–c-Kit+ cells) responded to CCR2 ligands in vitro. In vivo analysis indicated that after instillation of thioglycollate to cause aseptic inflammation and after administration of acetaminophen to induce liver damage, endogenous HSCs/HPCs were actively recruited to the peritoneum and liver, respectively, in WT but not Ccr2–/– mice. HSCs/HPCs recovered from the peritoneum successfully engrafted into the BM of irradiated primary and secondary recipients, confirming their self renewal and multipotency. Importantly, administration of exogenous WT, but not Ccr2–/–, HSCs/HPCs accelerated resolution of acetaminophen-induced liver damage and triggered the expression of genes characteristic of the macrophage M2 or repair phenotype. These findings reveal what we believe to be a novel role for CCR2 in the homing of HSCs/HPCs to sites of inflammation and suggest new functions for chemokines in promoting tissue repair and regeneration.

Expression of functional CCR2 on HSCs and HPCs. 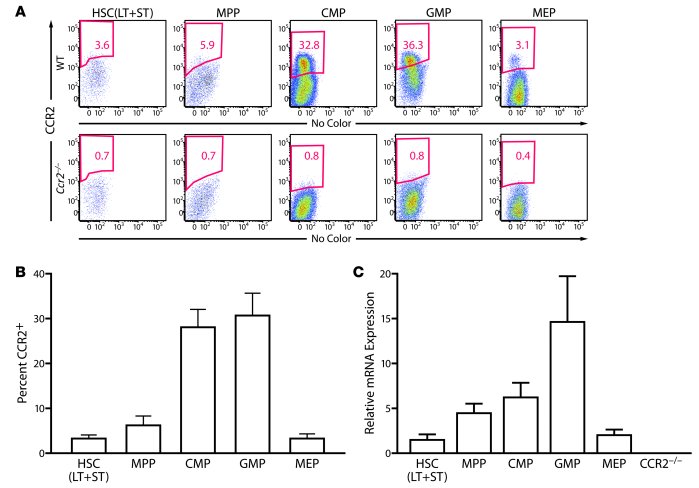