The effect of chemotherapy on permeability of tumor cells to GrzB. 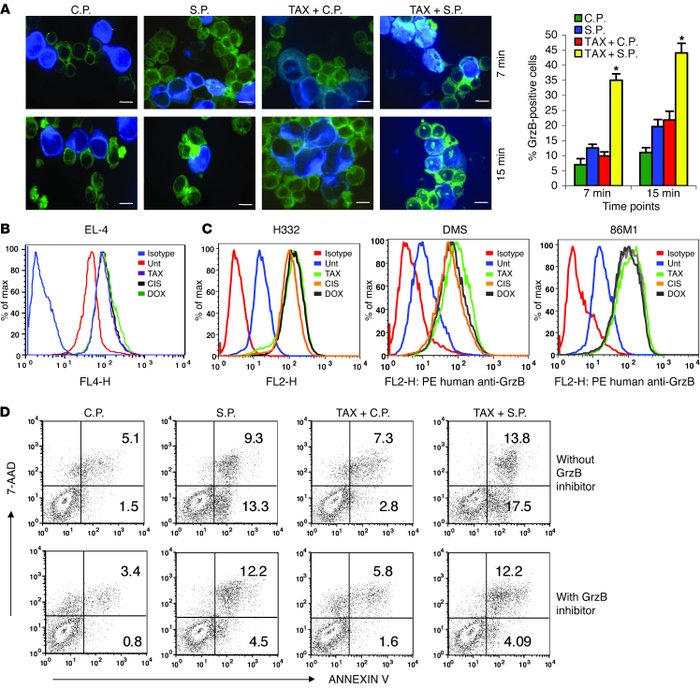 () EL-4 cells were treated with TAX and loaded with control or specific peptides as described above. Cells were labeled with CMAC and mixed with OT-1 cells at a 1:10 ratio and incubated for 7 and 15 minutes, then fixed and stained with anti-GrzB monoclonal antibody, followed by FITC-conjugated secondary antibody. The proportion of GrzB+ cells among blue target cells was calculated in triplicate by counting 200 target cells. Scale bars: 10 μm. Data represent mean ± SEM of 4 experiments. * < 0.05 versus untreated tumor cells loaded with control peptide. () CMAC-labeled TAX-, DOX-, or CIS-treated EL-4 cells were incubated with 1 μg/ml recombinant mouse GrzB for 30 minutes. Cells were fixed and stained with anti–mouse GrzB antibody. The presence of GrzB was detected by flow cytometry. Histogram overlays represent isotype control, untreated EL-4 cells, and TAX-, CIS-, or DOX-treated cells. Each experiment was repeated 3 times with the same results. () The above experimental procedure was used for detecting the presence of GrzB+ cells in human cell lines. Human recombinant GrzB and PE-conjugated anti–human GrzB antibody were used. Tumor cells were treated overnight with 12.5 nM TAX, 25 ng/ml DOX, or 25 ng/ml CIS. These doses did not decrease cell viability after overnight treatment by more than 5% but significantly reduced the cell growth of tumor cells. After 48 hours, these doses caused apoptosis in more than 90% of cells. Isotype control IgG was used in all samples and showed similar values. Isotype control of TAX-treated cells is shown. Histogram overlays represent isotype, untreated tumor cells, and TAX-, CIS-, or DOX-treated cells. Each experiment was repeated twice with the same results. () OT-1 T cells were pretreated with GrzB inhibitor I (Z-AAD-CMK) prior to incubation with EL-4 cells. The target cells were labeled with CMAC; the effectors were labeled with DDAO-SE. The target population was assessed for apoptosis using Annexin V–FITC/7AAD staining and analyzed using flow cytometry. Apoptosis was measured among tumor cells. Data represent 2 experiments with the same results.