Combined effect of chemotherapy and immunotherapy. 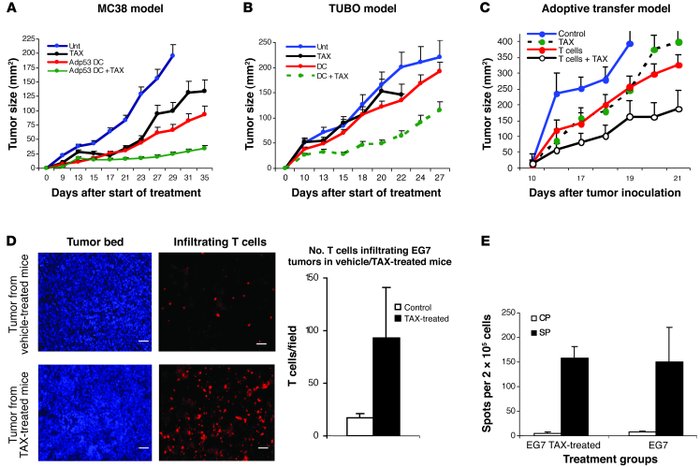 () Murine colon carcinoma tumors were established in C57BL/6 mice by s.c. injection of MC38 tumor cells. Treatment was started 5 days after tumor inoculation. Mice in treatment groups (DC, DC + TAX) were injected s.c. with 5 × 105 DCs transduced with recombinant adenovirus containing the mouse wild-type p53 gene (Adp53). Immunizations were repeated twice at 7-day intervals. Treatment with TAX (12.5 mg/kg) was started 3 days after the second immunization. Tumor size was calculated by multiplying the 2 longest dimensions. = 5 mice group. The experiment was repeated twice with the same results. Unt, untreated. () Mammary carcinoma TUBO was established s.c. in BALB/c mice. The treatment times and intervals were the same as in . DCs used for immunizations were loaded with 10 μg/ml Neu-derived peptide. = 5 mice group. The experiment was repeated twice with the same results. () T cells from mice immunized with OVA-derived peptide SIINFEKL were transferred to EG7 tumor–bearing C57BL/6 mice by i.v. injection of 5 × 106 cells. The treatment protocol for the treatment with TAX and adoptive transfer is described in Methods. = 4 mice group. The experiment was repeated once with the same results. () EG7 tumors were established s.c. in C57BL/6 mice. On day 16, the mice were treated with TAX (12.5 mg/kg) i.p. Three days later, they were administered 5 × 106 CMAC-labeled T cells from mice immunized with SIINFEKL. The tumors were removed 24 hours later, and cryosections were prepared. The slides were observed under a Leica fluorescence microscope, and 20 high-power (×400) fields were counted per slide. Right: Number of T cells per tumor field in 3 mice per group. < 0.05, 2-sided test. Scale bars: 5 μm. In –, data are shown as mean ± SEM. () EG7 tumors were established by s.c. injection of 3 × 105 cells. When tumor reached 1.5 cm in diameter, 5 × 106 OT-T cells were injected i.v. in each mouse. After 3 days, half of the mice received 12.5 mg/kg BW TAX i.p. Splenocytes were collected 6 days later and restimulated with control (CP) or specific (SP) peptides. IFN-γ production was evaluated by ELISPOT assay. The number of spots per 2 × 105 lymph node cells are shown. Each point represents mean ± SD of 6 replicates.