CD20 was the first B cell differentiation antigen identified, and CD20-specific mAbs are commonly used for the treatment of B cell malignancies and autoantibody-mediated autoimmune diseases. Despite this the role of CD20 in human B cell physiology has remained elusive. We describe here a juvenile patient with CD20 deficiency due to a homozygous mutation in a splice junction of the CD20 gene (also known as MS4A1) that results in “cryptic” splicing and nonfunctional mRNA species. Analysis of this patient has led us to conclude that CD20 has a central role in the generation of T cell–independent (TI) antibody responses. Key evidence to support this conclusion was provided by the observation that although antigen-independent B cells developed normally in the absence of CD20 expression, antibody formation, particularly after vaccination with TI antigens, was strongly impaired in the patient. Consistent with this, TI antipolysaccharide B cell responses were severely impeded in CD20-deficient mice. Our study therefore identifies what we believe to be a novel type of humoral immunodeficiency caused by CD20 deficiency and characterized by normal development of antigen-independent B cells, along with a reduced capacity to mount proper antibody responses. 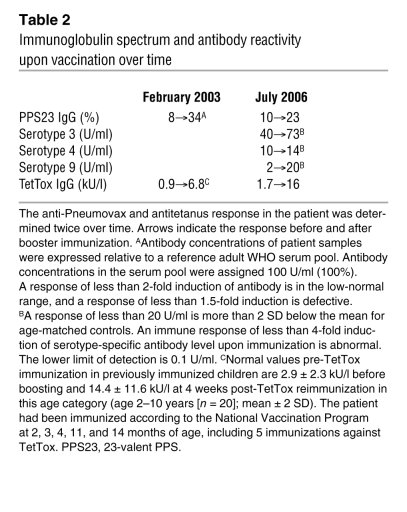 Immunoglobulin spectrum and antibody reactivity upon vaccination over time