Regulation of sodium balance is a critical factor in the maintenance of euvolemia, and dysregulation of renal sodium excretion results in disorders of altered intravascular volume, such as hypertension. The amiloride-sensitive epithelial sodium channel (ENaC) is thought to be the only mechanism for sodium transport in the cortical collecting duct (CCD) of the kidney. However, it has been found that much of the sodium absorption in the CCD is actually amiloride insensitive and sensitive to thiazide diuretics, which also block the Na-Cl cotransporter (NCC) located in the distal convoluted tubule. In this study, we have demonstrated the presence of electroneutral, amiloride-resistant, thiazide-sensitive, transepithelial NaCl absorption in mouse CCDs, which persists even with genetic disruption of ENaC. Furthermore, hydrochlorothiazide (HCTZ) increased excretion of Na+ and Cl– in mice devoid of the thiazide target NCC, suggesting that an additional mechanism might account for this effect. Studies on isolated CCDs suggested that the parallel action of the Na+-driven Cl–/HCO3– exchanger (NDCBE/SLC4A8) and the Na+-independent Cl–/HCO3– exchanger (pendrin/SLC26A4) accounted for the electroneutral thiazide-sensitive sodium transport. Furthermore, genetic ablation of SLC4A8 abolished thiazide-sensitive NaCl transport in the CCD. These studies establish what we believe to be a novel role for NDCBE in mediating substantial Na+ reabsorption in the CCD and suggest a role for this transporter in the regulation of fluid homeostasis in mice. 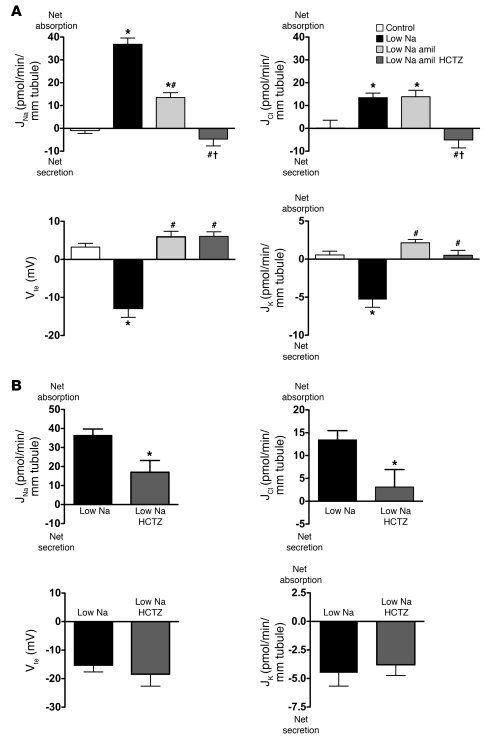