Mice deficient in the hemochromatosis gene, Hfe, have attenuated inflammatory responses to Salmonella infection associated with decreased macrophage TNF-α and IL-6 biosynthesis after exposure to LPS. In this study, we show that the abnormal cytokine production is related to impaired TLR4 signaling. Despite their abnormal response to LPS, Hfe KO macrophages produced amounts of TNF-α similar to those in WT cells after TLR2 stimulation. Consistent with this finding, LPS-induced activation of Mal/MyD88-dependent events was normal in the mutant macrophages. However, LPS-induced IFN-β expression, a TRAM/TRIF-dependent response activated by TLR4, was reduced by Hfe deficiency. This reduction could be replicated in WT macrophages with the use of iron chelators. In contrast, TLR3-activated expression of IFN-β, a TRIF-dependent response, was normal in Hfe KO macrophages and was unaffected by iron chelation. Our data suggest that low intracellular iron selectively impairs signaling via the TLR4/TRAM/TRIF pathway proximal to TRIF and results in reduced LPS-induced cytokine expression. Furthermore, by mimicking the altered iron metabolism associated with Hfe deficiency, we found that 3 different inhibitors of hepcidin attenuated Salmonella-induced and noninfectious enterocolitis. Thus, manipulation of iron homeostasis could represent a new therapeutic approach to controlling inflammation.

KO macrophages have an abnormal cytokine response to stimulation with TLR4, but not TLR2. 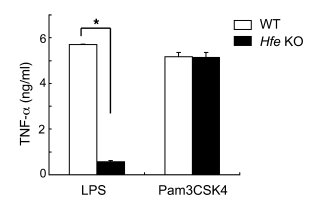 Peritoneal macrophages from WT and KO mice were stimulated with 100 ng/ml LPS ( = 4) or 1 μg/ml Pam3CSK4 ( = 3) for 6 hours. Supernatants were collected and analyzed by ELISA for TNF-α. Data represent mean ± SD. Similar results were obtained in 2 separate experiments. * < 0.0001.