The B cell lymphoma 2 (Bcl-2) family member Bcl-xL has a well-characterized antiapoptotic function in lymphoid cells. However, its functions in other cells — including osteoclasts, which are of hematopoietic origin — and other cellular processes remain unknown. Here we report an unexpected function of Bcl-xL in attenuating the bone-resorbing activity of osteoclasts in mice. To investigate the role of Bcl-xL in osteoclasts, we generated mice with osteoclast-specific conditional deletion of Bcl-x (referred to herein as Bcl-x cKO mice) by mating Bcl-xfl/fl mice with mice in which the gene encoding the Cre recombinase has been knocked into the cathepsin K locus and specifically expressed in mature osteoclasts. Although the Bcl-x cKO mice grew normally with no apparent morphological abnormalities, they developed substantial osteopenia at 1 year of age, which was caused by increased bone resorption. Bcl-x deficiency increased the bone-resorbing activity of osteoclasts despite their high susceptibility to apoptosis, whereas Bcl-xL overexpression produced the opposite effect. In addition, Bcl-x cKO osteoclasts displayed increased c-Src activity, which was linked to increased levels of vitronectin and fibronectin expression. These results suggest that Bcl-xL attenuates osteoclastic bone-resorbing activity through the decreased production of ECM proteins, such as vitronectin and fibronectin, and thus provide evidence for what we believe to be a novel cellular function of Bcl-xL.

Ras-Mek-Erk pathways are upstream of Bcl-xL in osteoclasts. 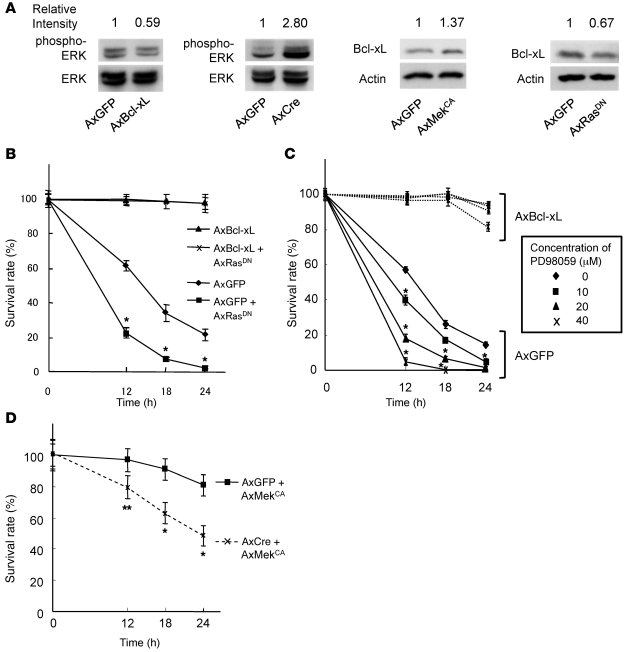