Happy pills in America: From Miltown to Prozac 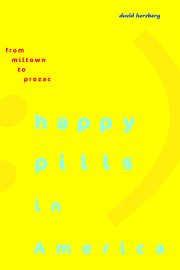 “Happy pills” — in particular the anxiolytic drugs Miltown and Valium and the antidepressant Prozac — have been spectacularly successful “products” over the last 5 decades, largely because they have widespread off label use. Miltown, launched in the 1950s, was the first “blockbuster” psychotropic drug in the US. However, by 1970 it was reclassified as a sedative and considered a controlled substance due to the risk of dependence, and its market was largely replaced by Valium. Valium, approved in the early 1960s, became the top-selling pharmaceutical in the US in the 1970s. While still prescribed today for the short-term treatment of anxiety, it is now largely used in the treatment of epilepsy and spastic disorders. Prozac, brought to the US market in the late 1980s, is used to treat major depression, obsessive compulsive disorder, bulimia, and anxiety disorders and today is the third most prescribed antidepressant on the US market. These drugs were widely accepted by and prescribed for people who did not meet clinical criteria for diagnosis of anxiety disorders or major depression, the indications for which the FDA approved them. They were promoted inadvertently by publicity in magazines and newspapers and purposefully by seductive advertising to doctors in medical journals. They became popular, each a fad in its time.

In Happy pills in America, David Herzberg — an assistant professor in the Department of History at the University of Buffalo — does an excellent job of expounding on the interplay of social, cultural, and commercial forces that influenced the rise and fall of these blockbuster drugs. Most psychiatric disorders consist of symptoms and traits that lie on a spectrum with normal behavior. Determining “caseness,” meaning what constitutes the best definition of a disease or disorder, such as major depressive disorder or generalized anxiety disorder, and distinguishes it from everyday, life event–related anxiety and depression, remains a serious challenge, even now, as the American Psychiatric Association task force convenes to write the fifth edition of the Diagnostic and statistical manual of mental disorders (DSM-V). The relatively primitive state of the art of psychiatric diagnosis allows a range of political, cultural, and commercial interests and agendas to influence disease concepts. Pharmaceutical companies broadened concepts of anxiety and depression through their advertisements, in pursuit of greater sales. Physicians who should have been the gatekeepers — after all, a prescription is required to obtain these drugs — succumbed to various pressures, including advertisements, patient requests, and so on, to overprescribe, as these drugs became part of a larger, postwar, consumer-oriented search for happiness in American culture. The author makes an important point when he says, “happiness itself came to be a part of a new psychological standard of living.”

Herzberg misses an opportunity to explore relevant, known pharmacologic distinctions across drug categories such as antipsychotics, anxiolytics, antidepressants, alcohol, stimulants, and opiates. Research on neurotransmitter and receptor pharmacology has helped to explain why drugs may or may not be susceptible to abuse or acceptance for popular use. Herzberg attempts to draw a parallel between suburban use and abuse of prescription drugs by people of mixed European descent and urban street drug use by minorities. He fails to distinguish between taking drugs to alleviate negative emotions and taking drugs to get “high,” behaviors that know no social or geographic boundaries. The most relevant determinant of a substance used for either purpose may be cost. Cheap alcohol and crack cocaine or prescription pills and powder cocaine, respectively, are the anxiolytic/antidepressants and the drugs of choice for getting high of the poor and the affluent elements of society. It is not news that alcohol, the qat plant, and opium have served both of these purposes for centuries.

Despite their deficiencies and commercial motivations, the medical profession and pharmaceutical industry at times receive too cynical a portrayal from Herzberg. Many physicians were good diagnosticians and gatekeepers, not sucked in by industry advertisements. These drugs have truly benefited many deserving patients and represented true scientific advances over their predecessors. The pharmaceutical industry has and continues to do good in developing new and better treatments for psychiatric disorders; it is in their best interest to do so. Marginally effective drugs do not become blockbusters, regardless of how aggressively they are marketed.

Happy pills in America is recommended reading for those members of the lay public with an interest in psychopharmacology. However, not everyone will share Herzberg’s sociopolitical stance. He opines that, “surely universal access to good medical care would be a reasonable alternative to investing in more drug wars.” In an ideal world no one would disagree, but that is not the world in which we live. Take Happy pills in America with a grain of salt.