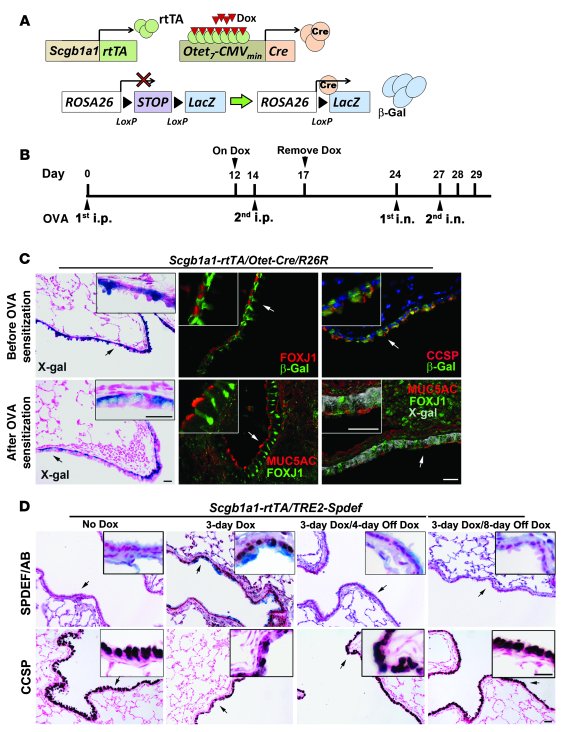 () Adult mice were mated to R26R mice. () To permanently label Clara cells, doxycycline (Dox) was administered from days 12 to 17 during i.p. sensitization with OVA. Mice were sacrificed either before receiving the first i.n. sensitization (day 24) to assess Clara cell labeling with β-gal or after the second i.n. sensitization (day 29) with OVA to induce goblet cell hyperplasia. () Before pulmonary OVA sensitization, β-gal was expressed in nonciliated epithelial cells, as shown by its exclusion from FOXJ1-expressing cells and colocalization with CCSP. After sensitization, β-gal was detected (white pseudocolor) in most goblet cells, identified by MUC5AC, indicating their derivation from Clara cells. MUC5AC, β-gal, and FOXJ1 were not colocalized. () mice were treated 3 days with or without doxycycline. SPDEF induced goblet cell differentiation as detected by Alcian blue (AB) and by changes in cell morphology. SPDEF staining decreased 4 and 8 days after withdrawal of doxycycline, at which time goblet cell differentiation was substantially resolved. CCSP was decreased in the conducting airway epithelium 3 days after induction of SPDEF. 4 to 8 days after withdrawal of doxycycline, CCSP staining was restored. Inserts show higher magnifications of the regions indicated by arrows. Scale bars: 25 μm.