X-linked nephrogenic diabetes insipidus (XNDI) is a severe kidney disease caused by inactivating mutations in the V2 vasopressin receptor (V2R) gene that result in the loss of renal urine-concentrating ability. At present, no specific pharmacological therapy has been developed for XNDI, primarily due to the lack of suitable animal models. To develop what we believe to be the first viable animal model of XNDI, we generated mice in which the V2R gene could be conditionally deleted during adulthood by administration of 4-OH-tamoxifen. Radioligand-binding studies confirmed the lack of V2R-binding sites in kidneys following 4-OH-tamoxifen treatment, and further analysis indicated that upon V2R deletion, adult mice displayed all characteristic symptoms of XNDI, including polyuria, polydipsia, and resistance to the antidiuretic actions of vasopressin. Gene expression analysis suggested that activation of renal EP4 PGE2 receptors might compensate for the lack of renal V2R activity in XNDI mice. Strikingly, both acute and chronic treatment of the mutant mice with a selective EP4 receptor agonist greatly reduced all major manifestations of XNDI, including changes in renal morphology. These physiological improvements were most likely due to a direct action on EP4 receptors expressed on collecting duct cells. These findings illustrate the usefulness of the newly generated V2R mutant mice for elucidating and testing new strategies for the potential treatment of humans with XNDI.

Targeting strategy for conditional disruption of the mouse gene. 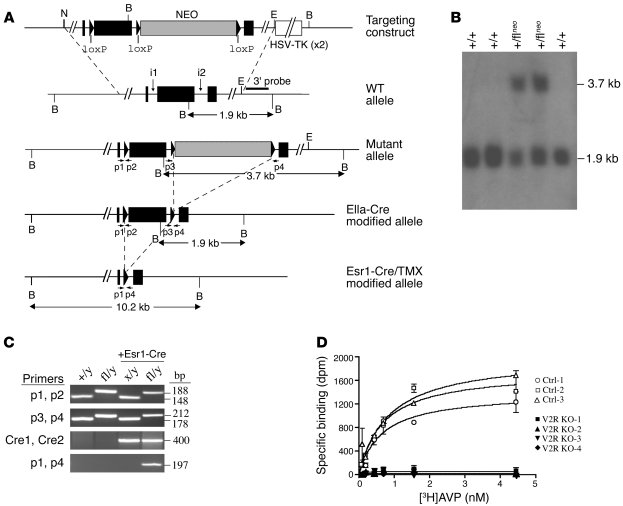 () Structures of the targeting construct, the WT V2R locus, the recombined mutant allele, and the EIIa-Cre– and Esr1-Cre–modified V2R alleles. Note that the V2R coding sequence (represented by the 3 filled boxes) is disrupted by 2 short introns (i1 and i2). The positions of the PCR primers used for genotyping studies (p1–p4) are indicated (see Methods for details). B, BamHI; E, EcoRI; N, NotI. () Genotyping of female F2 mice to verify the proper integration of the targeting vector via Southern blot analysis. Genomic DNA prepared from tails of female F2 WT (+/+) or heterozygous V2R mutant mice () mice was digested with BamHI and subjected to Southern blot analysis using the 3′ probe (see ). The 1.9- and 3.7-kb bands represent the WT and the mutant V2R alleles, respectively. () PCR analysis of genomic DNA prepared from kidneys of male mice of the indicated V2R genotypes. The location of PCR primers p1–p4 is indicated in . Use of PCR primers p1 and p4 resulted in a 197-bp band only in the case of kidney DNA prepared from TMX-treated mice, indicative of Cre-mediated disruption of the gene. () [3H]-AVP–binding studies. [3H]-AVP saturating binding studies were carried out with whole-kidney membrane homogenates prepared from 4 male TMX-treated mice (V2R-KO mice) and 3 control (Ctrl) littermates (TMX-treated mice) (mouse age, 8 months; see Methods for details).