Pavlov’s dogs and Schrödinger’s cat: Scenes from the living laboratory 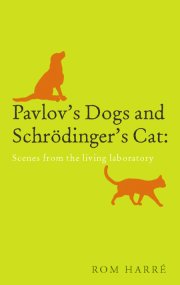 I enjoyed Rom Harré’s earlier effort, Great scientific experiments: twenty experiments that changed our view of the world (1) over 25 years ago. Like that book, Pavlov’s dogs and Schrödinger’s cat: scenes from the living laboratory takes the reader on a sentimental journey through the history of the use of animals and plants in scientific research. For example, Harré reminds us of the controversial primate work in the 1960s of American psychologist Harry F. Harlow. Harlow studied the psychological development of young rhesus monkeys exposed to “mothers” made of terry cloth or wire; the findings of these studies provided great insight into the importance of affection, security, attachment, and emotional support in childhood development. Harré also discusses Laika, the Russian space dog, who — as a precursor to humans in space flight — became the first living mammal launched into orbit in 1957. Ivan Pavlov’s famous dogs, which taught us about the gastric system, are also mentioned. Descriptions of other classic studies are included, involving countless and unnamed voles, fruit flies, and fish. However, some “classics” are missing, such as the work of American biologist James V. McConnell in the 1950s and 1960s on learning and memory transfer in flatworms — perhaps omitted due to the reported difficulty in reproducing the original work. Other readers may find other favorites missing. Nonetheless, a nice selection of historical examples is presented in light and readable prose.

Pavlov’s dogs and Schrödinger’s cat is about the way animals have been utilized in the laboratory, whether that lab is on earth, in space, or just in an open field. The author spends a great deal of time distinguishing between apparatuses (related conceptually to the world) and instruments (related causally to the world) and trying to establish the role that living organisms fill in both of those settings. It is an unusual approach to be sure.

The book would be a nice gift for that bright high school student interested in biology or someone who would like to be reminded of some of the classic uses for research animals. The book benefits from a variety of accompanying illustrations; many are immediately dated by their appearance, reflecting the photographic standards of the time when they were prepared. Some are etchings, others drawings; all are historically elegant.

While the writing flows well from chapter to chapter and story to story, my favorite accounts are the narratives in the chapter entitled “Inventing novel beings: an imaginary cat and virtual life forms.” The author describes one mechanism by which we share ideas through knowledge of common experiences; we invent situations with which we are all familiar and invite the reader to consider the outcome; for example “. . . Galileo asks us to imagine a horseman at full gallop, throwing up a spear above him. Can he catch it again?” Such thought experiments are a good way to communicate ideas and think about concepts. Erwin Schrödinger’s cat paradox, devised by the Austrian physicist in 1935 to describe the difficulty of applying quantum physics to everyday life, is beautifully described and presented in its historical context. This thought experiment conjures an imaginary cat whose well-being is a function of a prior random event. The author indicates by implication that the syllogism is only effective when the “novel being” accurately reflects the situation that is being analogized. Perhaps, for this reason, the author repeatedly reminds us of the times and the environment in which many of the thought experiments were performed. If you like a little history with your science, you will enjoy this book.

Largely absent from the book is a focused discussion of the ethics of the use of animals in scientific research, a fact that is conceded immediately inside the book’s jacket and again on the rear cover. The portrayal of animals (and even humans) as “apparatuses” and “instruments” by which we measure our physical environment may prove unfortunate. It may cause this book to become a target of convenience for those who would ascribe rights to animals — and provide a further scrap of erroneous evidence that we researchers view animals coldly, as part of the background, without adequate concern for their feelings and welfare. Nothing could be further from the truth.