Dorsal root ganglion (DRG) neuron dysfunction occurs in a variety of sensory neuronopathies for which there are currently no satisfactory treatments. Here we describe the development of a strategy to target therapeutic genes to DRG neurons for the treatment of these disorders. We genetically modified an adenovirus (Ad) to generate a helper virus (HV) that was detargeted for native adenoviral tropism and contained DRG homing peptides in the adenoviral capsid fiber protein; we used this HV to generate DRG-targeted helper-dependent Ad (HDAd). In mice, intrathecal injection of this HDAd produced a 100-fold higher transduction of DRG neurons and a markedly attenuated inflammatory response compared with unmodified HDAd. We also injected HDAd encoding the β subunit of β-hexosaminidase (Hexb) into Hexb-deficient mice, a model of the neuronopathy Sandhoff disease. Delivery of the DRG-targeted HDAd reinstated neuron-specific Hexb production, reversed gangliosidosis, and ameliorated peripheral sensory dysfunction. The development of DRG neuron–targeted HDAd with proven efficacy in a preclinical model may have implications for the treatment of sensory neuronopathies of diverse etiologies. 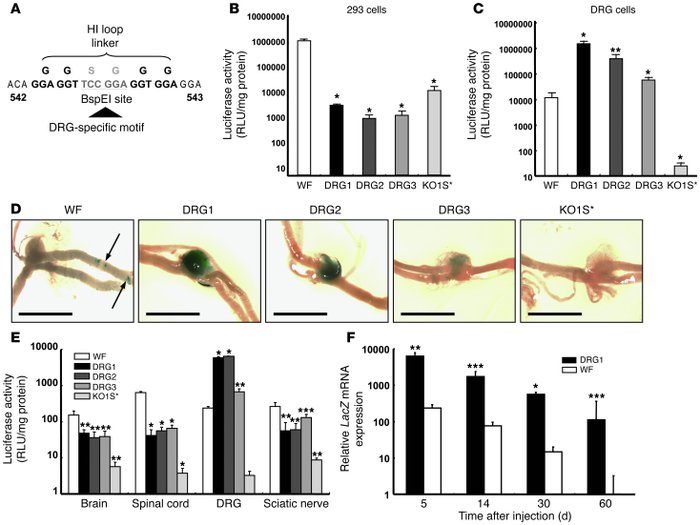 () DRG homing peptides DRG1, DRG2, and DRG3 were inserted into the BspEI site in the HI loop of fiber protein. () Luciferase activity in 293 cells. Cells were infected with HVs at 1,000 vp/cell and were harvested 24 hours after infection for luciferase assay ( = 6). () Luciferase activity in HV-infected DRG neurons. Primary DRG neurons were infected, and luciferase activity was determined, as described in . () expression in DRG. Fiber-modified HVs (1 × 108 vp) were injected into C57BL/6 mice through subarachnoid space at the lumbar level. Mice were sacrificed 5 days after HV injection and stained for expression. Arrows denote X-gal–positive areas at nerve portion. Scale bars: 2 mm. () Luciferase activities in nervous systems. Fiber-modified HVs (1 × 108 vp) were injected into C57BL/6 mice as described in , and neuronal tissues were harvested 5 days after injection. () Long-term expression in DRG. Mice were treated with 1 × 108 vp HV-WF or HV-DRG1 and sacrificed at various times. mRNA in DRG was quantified by real-time RT-PCR and normalized to β-actin mRNA. Results are expressed relative to the day-60 HV-WF group. * < 0.001, ** < 0.01, *** < 0.05 versus WF. Note the use of log scale in , , , and .