As most metabolic studies are conducted in male animals, understanding the sex specificity of the underlying molecular pathways has been broadly neglected; for example, whether PPARs elicit sex-dependent responses has not been determined. Here we show that in mice, PPARα has broad female-dependent repressive actions on hepatic genes involved in steroid metabolism and immunity. In male mice, this effect was reproduced by the administration of a synthetic PPARα ligand. Using the steroid oxysterol 7α-hydroxylase cytochrome P450 7b1 (Cyp7b1) gene as a model, we elucidated the molecular mechanism of this sex-specific PPARα-dependent repression. Initial sumoylation of the ligand-binding domain of PPARα triggered the interaction of PPARα with GA-binding protein α (GABPα) bound to the target Cyp7b1 promoter. Histone deacetylase and DNA and histone methylases were then recruited, and the adjacent Sp1-binding site and histones were methylated. These events resulted in loss of Sp1-stimulated expression and thus downregulation of Cyp7b1. Physiologically, this repression conferred on female mice protection against estrogen-induced intrahepatic cholestasis, the most common hepatic disease during pregnancy, suggesting a therapeutic target for prevention of this disease.

The AF-2 domain is essential for PPARα repression of . 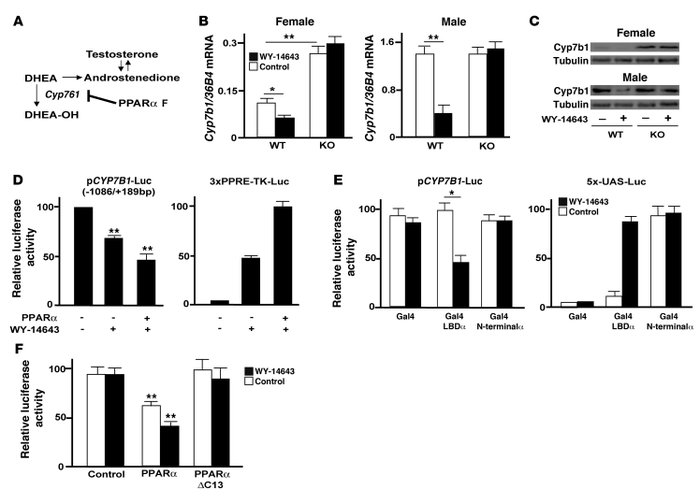 () Schematic representation of PPARα-modulated androgen production through regulation of Cyp7b1 in females (F). () Age-matched female and male WT and PPARα-null mice were treated with WY-14643 for 5 days, and hepatic expression was measured by quantitative real-time PCR ( = 6 per group) and () Western blotting. () Cotransfection of luc-reporter gene driven by a 1,086-bp promoter fragment [(–1086/+189bp)] and mouse PPARα expression vector. 3X-PPRE-TK- was used as a positive control. () The LBDα or N-terminal domain of PPARα was fused to the Gal4 DBD. The chimeras were cotransfected with the reporter gene. 5X-UAS-TK- was used as a control for the activity of the PPARα N-terminal domain and LBD chimera ( = 4 per group). () PPARα lacking the 13 C-terminal amino acids (PPARαΔC13) failed to repress activity. (–) After transfection, cells were treated with WY-14643 (1 μM) or DMSO (vehicle; Control) for 20 hours. Values are presented as mean ± SEM ( = 3). * ≤ 0.05, ** ≤ 0.01 versus control.