The mammalian epididymis provides sperm with an environment that promotes their maturation and protects them from external stresses. For example, it harbors an array of antioxidants, including non-conventional glutathione peroxidase 5 (GPX5), to protect them from oxidative stress. To explore the role of GPX5 in the epididymis, we generated mice that lack epididymal expression of the enzyme. Histological analyses of Gpx5–/– epididymides and sperm cells revealed no obvious defects. Furthermore, there were no apparent differences in the fertilization rate of sexually mature Gpx5–/– male mice compared with WT male mice. However, a higher incidence of miscarriages and developmental defects were observed when WT female mice were mated with Gpx5-deficient males over 1 year old compared with WT males of the same age. Flow cytometric analysis of spermatozoa recovered from Gpx5-null and WT male mice revealed that sperm DNA compaction was substantially lower in the cauda epididymides of Gpx5-null animals and that they suffered from DNA oxidative attacks. Real-time PCR analysis of enzymatic scavengers expressed in the mouse epididymis indicated that the cauda epididymidis epithelium of Gpx5-null male mice mounted an antioxidant response to cope with an excess of ROS. These observations suggest that GPX5 is a potent antioxidant scavenger in the luminal compartment of the mouse cauda epididymidis that protects spermatozoa from oxidative injuries that could compromise their integrity and, consequently, embryo viability. 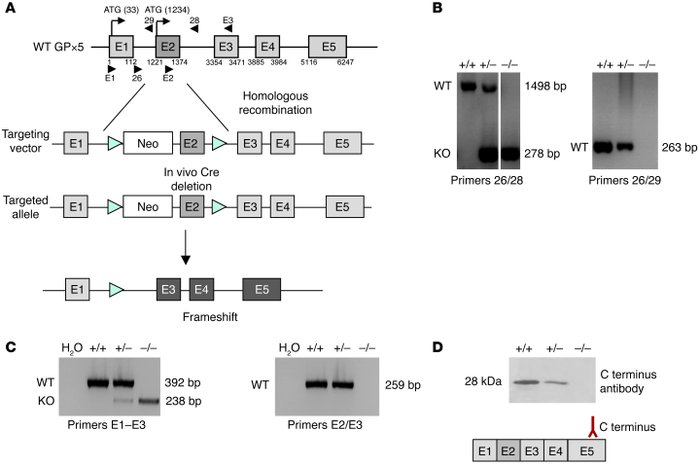 () Schematic representation of mouse gene organization. Top: Gray boxes (E1 to E5) indicate the 5 GPX5 coding exons. Black arrows point to in-frame ATG translational start sites. Arrowheads indicate the relative positions of the various primers used in PCR amplification. Numbers (in bp) at the boundaries of each exon correspond to the GenBank sequence (accession number NM_010343), with “1” indicating the cap site. Bottom: A scheme of the targeting vector and the resulting allele is shown. In vivo Cre-mediated excision of the exon 2 led to a premature translation frameshift. () PCR experiments carried out on genomic DNA extracted from animal fingers. In the left panel, lanes were run on the same gel but were noncontiguous. () RT-PCR assays carried out with mRNA extracted from caput epididymal tissues. In and , the bp numbers indicate the size of the amplified products, and the primer pairs used are indicated at the bottom of each panel (see ). () Western blot assays carried out with caput epididymidis protein extracts and a polyclonal anti-GPX5 antibody directed against a C-ter synthetic peptide (). The kDa number in the left margin indicates the size of the GPX5 full-length protein. +/+, +/–, and –/– indicate animals that were WT, KO heterozygous, or homozygous for GPX5. The H2O lanes correspond to a control amplification carried out on water.