The IL-23/IL-17 and IL-12/IFN-γ cytokine pathways have a role in chronic autoimmunity, which is considered mainly a dysfunction of adaptive immunity. The extent to which they contribute to innate immunity is, however, unknown. We used a mouse model of acute kidney ischemia-reperfusion injury (IRI) to test the hypothesis that early production of IL-23 and IL-12 following IRI activates downstream IL-17 and IFN-γ signaling pathways and promotes kidney inflammation. Deficiency in IL-23, IL-17A, or IL-17 receptor (IL-17R) and mAb neutralization of CXCR2, the p19 subunit of IL-23, or IL-17A attenuated neutrophil infiltration in acute kidney IRI in mice. We further demonstrate that IL-17A produced by GR-1+ neutrophils was critical for kidney IRI in mice. Activation of the IL-12/IFN-γ pathway and NKT cells by administering α-galactosylceramide–primed bone marrow–derived DCs increased IFN-γ production following moderate IRI in WT mice but did not exacerbate injury or enhance IFN-γ production in either Il17a–/– or Il17r–/– mice, which suggested that IL-17 signaling was proximal to IFN-γ signaling. This was confirmed by the finding that IFN-γ administration reversed the protection seen in Il17a–/– mice subjected to IRI, whereas IL-17A failed to reverse protection in Ifng–/– mice. These results demonstrate that the innate immune component of kidney IRI requires dual activation of the IL-12/IFN-γ and IL-23/IL-17 signaling pathways and that neutrophil production of IL-17A is upstream of IL-12/IFN-γ. These mechanisms might contribute to reperfusion injury in other organs. 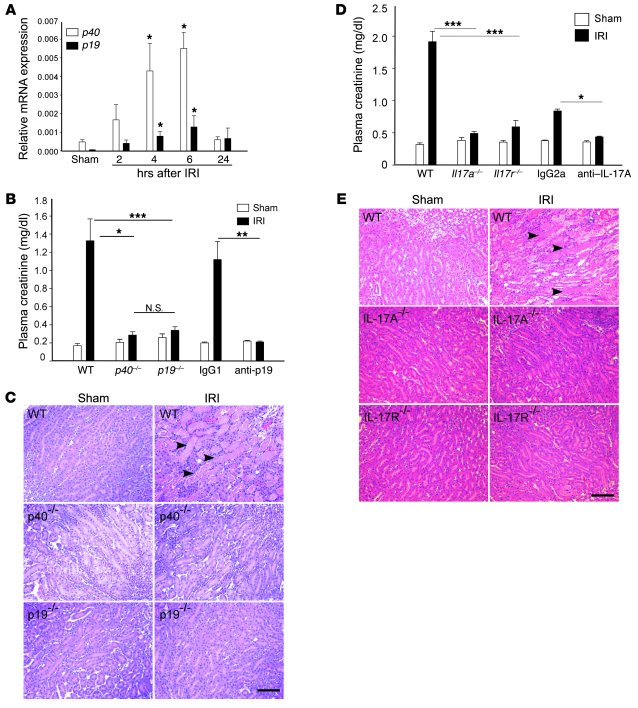