The pathogenic mechanisms underlying acute pancreatitis are not clear. Two key pathologic acinar cell responses of this disease are vacuole accumulation and trypsinogen activation. We show here that both result from defective autophagy, by comparing the autophagic responses in rodent models of acute pancreatitis to physiologic autophagy triggered by fasting. Pancreatitis-induced vacuoles in acinar cells were greater in number and much larger than those induced with fasting. Degradation of long-lived proteins, a measure of autophagic efficiency, was markedly inhibited in in vitro pancreatitis, while it was stimulated by acinar cell starvation. Further, processing of the lysosomal proteases cathepsin L (CatL) and CatB into their fully active, mature forms was reduced in pancreatitis, as were their activities in the lysosome-enriched subcellular fraction. These findings indicate that autophagy is retarded in pancreatitis due to deficient lysosomal degradation caused by impaired cathepsin processing. Trypsinogen activation occurred in pancreatitis but not with fasting and was prevented by inhibiting autophagy. A marker of trypsinogen activation partially localized to autophagic vacuoles, and pharmacologic inhibition of CatL increased the amount of active trypsin in acinar cells. The results suggest that retarded autophagy is associated with an imbalance between CatL, which degrades trypsinogen and trypsin, and CatB, which converts trypsinogen into trypsin, resulting in intra-acinar accumulation of active trypsin in pancreatitis. Thus, deficient lysosomal degradation may be a dominant mechanism for increased intra-acinar trypsin in pancreatitis.

Autophagy is activated in acute pancreatitis and is involved in acinar cell vacuolation. 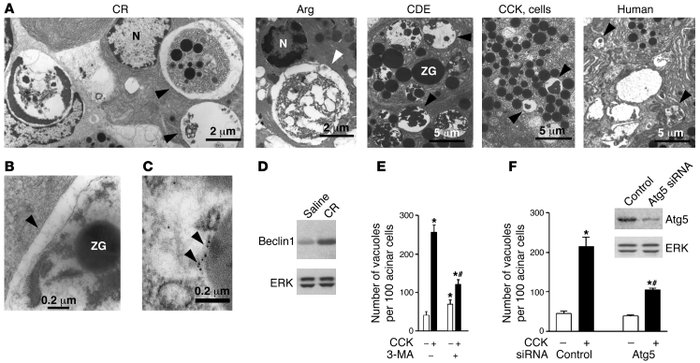 () Electron micrographs showing autophagic vacuoles (arrowheads) in pancreatic tissue (or isolated acinar cells) from experimental models of pancreatitis (see Methods) and in pancreas of a patient with acute pancreatitis. Shown is pancreatitis induced in rats by CR or Arg, in mice by CDE, and the in vitro model of acinar cells hyperstimulated with CCK. N, nucleus. Larger fields and higher-magnification images are shown in Supplemental Figure 1. () Electron micrograph demonstrating the double membrane (arrowhead), a characteristic of autophagosomes, in CR pancreatitis. () Electron micrograph illustrating LC3 immunogold localization (arrowheads) to an autophagic vacuole in pancreas of a GFP-LC3 transgenic mouse with CR pancreatitis. () Pancreatic level of beclin1 increased in CR pancreatitis (immunoblot). ERK1/2 served as loading control. ( and ) Inhibiting autophagy with 3-MA or Atg5 siRNA greatly decreased vacuolation in acinar cells hyperstimulated with CCK. () Rat acinar cells were incubated for 3 hours with or without 100 nM CCK and 10 mM 3-MA. Vacuoles were counted in cells stained with toluidine blue. () Mouse acinar cells were transfected with Atg5 siRNA or control siRNA (see Methods), and then incubated for 3 hours with and without 100 nM CCK. The inset illustrates transfection efficiency. Cells were immunostained for LC3, and vacuoles (LC3 dots) were counted under confocal microscope using ImageJ software. Values (mean ± SEM) are from at least 1,000 cells for each condition ( and ). * < 0.05 versus control cells; # < 0.05 versus CCK alone.