Acute hypoxic vasoconstriction and development of hypoxic pulmonary hypertension (PHTN) are unique properties of the pulmonary circulation. The pulmonary endothelium produces vasoactive factors, including nitric oxide (NO), that modify these phenomena. We tested the hypothesis that NO produced by endothelial nitric oxide synthase (eNOS) modulates pulmonary vascular responses to hypoxia using mice with targeted disruption of the eNOS gene (eNOS–/–). Marked PHTN was found in eNOS–/– mice raised in mild hypoxia when compared with either controls or eNOS–/– mice raised in conditions simulating sea level. We found an approximate twofold increase in partially and fully muscularized distal pulmonary arteries in eNOS–/– mice compared with controls. Consistent with vasoconstriction being the primary mechanism of PHTN, however, acute inhalation of 25 ppm NO resulted in normalization of RV pressure in eNOS–/– mice. In addition to studies of eNOS–/– mice, the dose–effect of eNOS was tested using heterozygous eNOS+/– mice. Although the lungs of eNOS+/– mice had 50% of normal eNOS protein, the response to hypoxia was indistinguishable from that of eNOS–/– mice. We conclude that eNOS-derived NO is an important modulator of the pulmonary vascular response to chronic hypoxia and that more than 50% of eNOS expression is required to maintain normal pulmonary vascular tone. 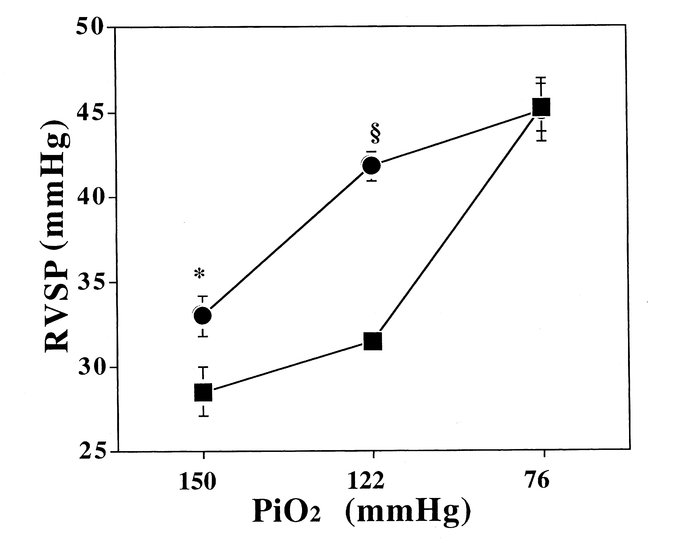