Seborrheic keratoses (SKs) are common, benign epithelial tumors of the skin that do not, or very rarely, progress into malignancy, for reasons that are not understood. We investigated this by gene expression profiling of human SKs and cutaneous squamous cell carcinomas (SCCs) and found that several genes previously connected with keratinocyte tumor development were similarly modulated in SKs and SCCs, whereas the expression of others differed by only a few fold. In contrast, the tyrosine kinase receptor FGF receptor–3 (FGFR3) and the transcription factor forkhead box N1 (FOXN1) were highly expressed in SKs, and close to undetectable in SCCs. We also showed that increased FGFR3 activity was sufficient to induce FOXN1 expression, counteract the inhibitory effect of EGFR signaling on FOXN1 expression and differentiation, and induce differentiation in a FOXN1-dependent manner. Knockdown of FOXN1 expression in primary human keratinocytes cooperated with oncogenic RAS in the induction of SCC-like tumors, whereas increased FOXN1 expression triggered the SCC cells to shift to a benign SK-like tumor phenotype, which included increased FGFR3 expression. Thus, we have uncovered a positive regulatory loop between FGFR3 and FOXN1 that underlies a benign versus malignant skin tumor phenotype.

Different expression levels of FOXN1 and FGFR3 in SK versus SCC tissue samples. 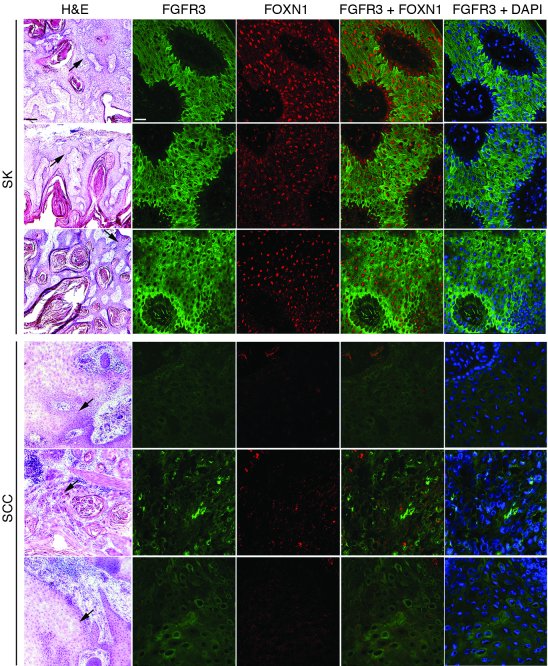 Frozen sections from 3 different surgically obtained SK and SCC tissue samples were stained with H&E or analyzed for expression of FGFR3 and FOXN1 by immunofluorescence analysis with corresponding primary antibodies and using FITC- (green) and rhodamine-conjugated (red) secondary antibodies, respectively, for detection. Concomitant staining patterns of FOXN1 and FGFR3 or of FGFR3 and DAPI (used for overall nuclear counterstaining) were visualized by image overlay. Fluorescent images correspond to the areas of the H&E sections indicated by arrows. No positive fluorescence signal was obtained when primary antibodies were preincubated with corresponding blocking peptides for 2 hours prior to incubation on sections (not shown). Scale bars: 200 μm (H&E); 20 μm (fluorescence).