Vaccinia virus (VV) vaccination is used to immunize against smallpox and historically was considered to have been successful if a skin lesion formed at the vaccination site. While antibody responses have been widely proposed as a correlate of efficacy and protection in humans, the role of cellular and humoral immunity in VV-associated skin lesion formation was unknown. We therefore investigated whether long-term residual humoral and cellular immune memory to VV, persisting 30 years after vaccination, could control VV-induced skin lesion in revaccinated individuals. Here, we have shown that residual VV-specific IFN-γ+TNF-α+ or IFN-γ+IL-2+ CD4+ lymphocytes but not CD8+ effector/memory lymphocytes expressing a skin-homing marker are inversely associated with the size of the skin lesion formed in response to revaccination. Indeed, high numbers of residual effector T cells were associated with lower VV skin lesion size after revaccination. In contrast, long-term residual VV-specific neutralizing antibody (NAbs) titers did not affect skin lesion formation. However, the size of the skin lesion strongly correlated with high levels of NAbs boosted after revaccination. These findings demonstrate a potential role for VV-specific CD4+ responses at the site of VV-associated skin lesion, thereby providing new insight into immune responses at these sites and potentially contributing to the development of new approaches to measure the efficacy of VV vaccination. 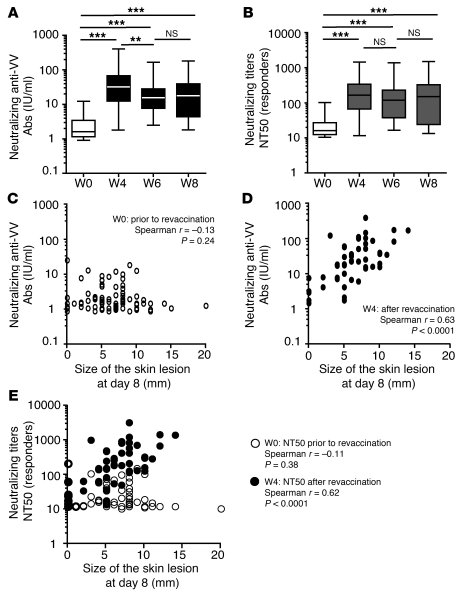