It took more than 100 years before it was established that the proteins that form intermediate filaments (IFs) comprise a unified protein family, the members of which are ubiquitous in virtually all differentiated cells and present both in the cytoplasm and in the nucleus. However, during the past 2 decades, knowledge regarding the functions of these structures has been expanding rapidly. Many disease-related roles of IFs have been revealed. In some cases, the molecular mechanisms underlying these diseases reflect disturbances in the functions traditionally assigned to IFs, i.e., maintenance of structural and mechanical integrity of cells and tissues. However, many disease conditions seem to link to the nonmechanical functions of IFs, many of which have been defined only in the past few years.

Overview of the IF protein family. 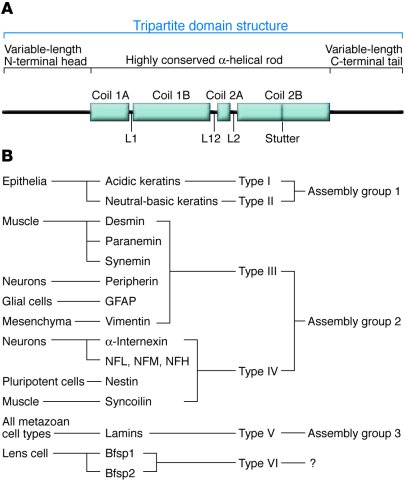 () All IF proteins share a tripartite domain structure consisting of a highly conserved α-helical central rod domain flanked by variable N-terminal head and C-terminal tail domains. () Based on central rod domain amino acid sequences, net acidic charge, and secondary structure predictions, cytoskeletal IF proteins were grouped into 4 sequence homology classes (types I–IV). Nuclear IF proteins, the lamins, constitute a fifth class. The sixth class of IF proteins (also referred to as orphans), beaded filament structural protein 1 (Bfsp1; also known as filensin) and Bfsp2 (also known as phakinin and CP49), form highly specialized IFs found only in the lens of the eye. Based on their abilities to copolymerize, the IF proteins of the 6 types are further subdivided into assembly groups 1–3. NFL, NFM, NFH, low–, middle–, and high–molecular weight neurofilament subunits, respectively.