Schematic showing the links between beaded filaments and IFs at different plasma membrane sites in the lens fiber cell. 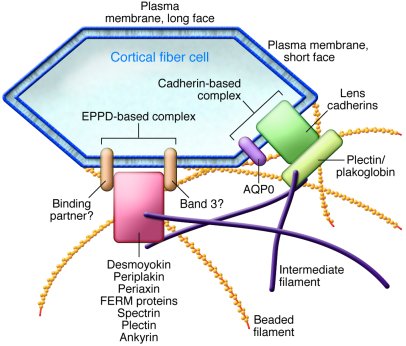 Beaded filaments interact with the plasma membranes of lens fiber cells and are often tightly associated, resisting even alkali extraction (). Two different protein complexes have been characterized recently in lens fiber cells (), termed the cadherin- and EPPD-based (ezrin, periplakin, periaxin, desmoyokin–based) complexes, which associate with the short and long faces of fiber cells (see Figure ), respectively. Plakoglobin and plectin are potential linkers for the IFs and beaded filaments to the cadherin complex. On the long faces of the fiber cells, a number of potential proteins that would link the IFs and beaded filaments to the plasma membrane have been identified (FERM, ankyrin), but the identity of the transmembrane proteins has yet to be determined. Although CD44 homologs were looked for, none were found (), but the lens does express band 3 (), which could link to ankyrin and spectrin. Some details of this lens plasma membrane–cytoskeleton complex might parallel that of the erythrocyte.