Schematic highlighting the unusual features of the protein domains in BFSP1 and BFSP2. 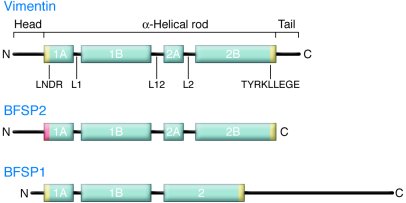 Predicted secondary structure for a typical IF protein (vimentin) compared with that predicted for BFSP2 and BFSP1. IF proteins are composed of an α-helical coiled-coil domain flanked by non-helical N and C termini. The boxes represent α-helical domains, which are separated by non-helical linkers L1, L12, and L2. The yellow boxes at the ends of helix 1A and 2B represent the highly conserved LNDR and TYRKLLEGE motifs, in which mutations usually seriously disturb IF function. These motifs are changed in mammalian BFSP1 (LGER and RYHRIIEIE, respectively) and BFSP2 (LGGC and SYHALLDRE, respectively). The R-to-C change in the LNDR motif of BFSP2 would actually cause disease if found in, for example, glial fibrillary acidic protein (GFAP) (), and for this reason the motif is colored red in the schematic. In fact, an R113C mutation causes cataract in mice when introduced into vimentin (). Clearly, it is the context of such a change that will determine whether this alone will abrogate filament function. The rod domain of BFSP1 is predicted to be 2–3 nm shorter than that of other mammalian IF proteins due to its shorter helix 2. BFSP2 lacks a C-terminal tail as also observed for keratin 19, a type 1 IF protein.