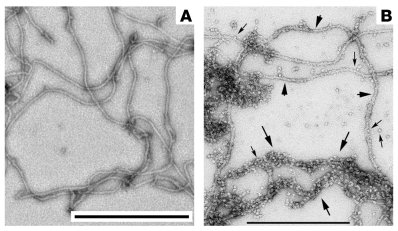 () The micrograph shows that in vitro, human BFSP2 and bovine BFSP1 form 10-nm filaments when mixed together at a molar ratio of 2:1. The human BFSP2 was produced recombinantly, while the BFSP1 was purified from bovine lenses. In the absence of α-crystallins, the BFSP1 and BFSP2 proteins form 10-nm filaments, supporting their inclusion in the IF superfamily. Both proteins were prepared as described in ref. . () This micrograph shows the native filaments present in the lens. Two types are apparent: Smooth, 10-nm filaments (arrowheads) are decorated with α-crystallin particles (small arrows). Beaded filaments (large arrows), which also contain α-crystallin particles, are much more abundant and appear untidy in their association with the supporting filament, to the extent that the filament backbone is almost totally obscured. By comparison, the 10-nm filaments are instantly recognizable despite being decorated with α-crystallin particles. These beaded filaments are the structures first described by Maisel and Perry as being lens specific, and it is from these that filensin and CP49 derive the names BFSP1 and BFSP2, respectively. Scale bars: 500 nm.