Muscle fiber deterioration resulting in progressive skeletal muscle weakness, heart failure, and respiratory distress occurs in more than 20 inherited myopathies. As discussed in this Review, one of the newly identified myopathies is desminopathy, a disease caused by dysfunctional mutations in desmin, a type III intermediate filament protein, or αB-crystallin, a chaperone for desmin. The range of clinical manifestations in patients with desminopathy is wide and may overlap with those observed in individuals with other myopathies. Awareness of this disease needs to be heightened, diagnostic criteria reliably outlined, and molecular testing readily available; this would ensure prevention of sudden death from cardiac arrhythmias and other complications. 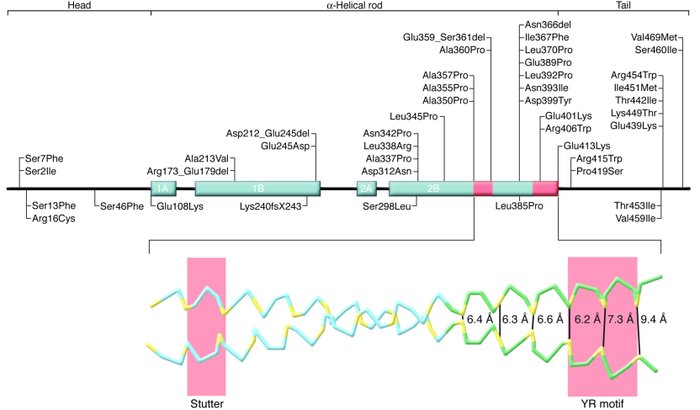 Top: Desmin is composed of an α-helical rod containing 303 amino acid residues, flanked by globular N- and C-terminal structures (known as the head and tail domains, respectively). The rod is interrupted in several places, resulting in four consecutive α-helical segments, 1A, 1B, 2A, and 2B, connected by short, nonhelical linkers. Helical segment 2B contains a discontinuity in the heptad repeat pattern (known as a stutter) and an YRKLLEGEE motif (red boxes within the protein structure). Most pathogenic desmin mutations reside within either the 2B helical segment or the tail. Bottom: Molecular model of desmin coiled-coil segment based on analogy with crystallographic data for human vimentin. The stutter is a discontinuity in the heptad repeat pattern equivalent to an insertion of four extra residues, an absolutely conserved feature of all IF proteins. Starting with several amino acids preceding the YR motif and through the YR peptide, the coiled-coil structure loosens and the monomers gradually separate, eventually bending away from each other. The angles and distances between residue positions in the 2B C-terminal helical segment are shown. The bottom portion has been adapted with permission from ().