The epigenetic silencing of tumor suppressor genes is a crucial event during carcinogenesis and metastasis. Here, in a human genome-wide survey, we identified scavenger receptor class A, member 5 (SCARA5) as a candidate tumor suppressor gene located on chromosome 8p. We found that SCARA5 expression was frequently downregulated as a result of promoter hypermethylation and allelic imbalance and was associated with vascular invasion in human hepatocellular carcinoma (HCC). Furthermore, SCARA5 knockdown via RNAi markedly enhanced HCC cell growth in vitro, colony formation in soft agar, and invasiveness, tumorigenicity, and lung metastasis in vivo. By contrast, SCARA5 overexpression suppressed these malignant behaviors. Interestingly, SCARA5 was found to physically associate with focal adhesion kinase (FAK) and inhibit the tyrosine phosphorylation cascade of the FAK-Src-Cas signaling pathway. Conversely, silencing SCARA5 stimulated the signaling pathway via increased phosphorylation of certain tyrosine residues of FAK, Src, and p130Cas; it was also associated with activation of MMP9, a tumor metastasis–associated enzyme. Taken together, these data suggest that the plasma membrane protein SCARA5 can contribute to HCC tumorigenesis and metastasis via activation of the FAK signaling pathway. 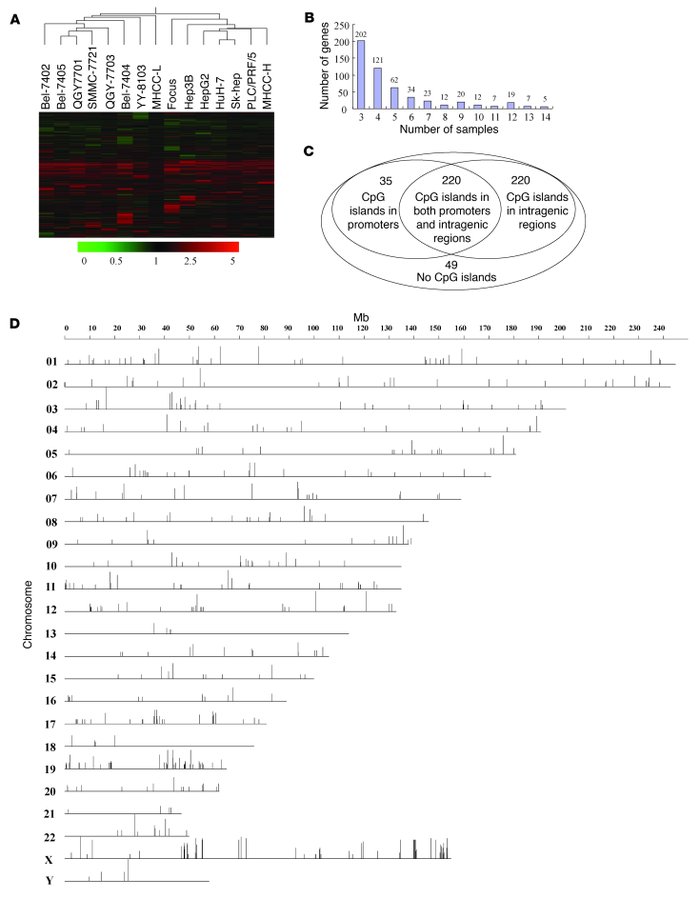 () Gene expression profiles of the 15 HCC cell lines that received treatment with or without DAC plus TSA were analyzed using an Agilent gene microarray. Clustering was performed with GeneSpring 7.5 software. Hierarchical clustering revealed 524 transcripts with marked upregulation, defined as an increase of more than 3 fold relative to those before treatment, in at least 3 cell lines, following drug treatment. () Distribution of the number of cell lines, showing marked upregulation (more than 3 fold) of the 524 genes after drug treatment. () Venn diagram of the distribution of the 524 upregulated genes, based on whether they do or do not possess CpG islands. () Chromosomal (chro) location of the 524 candidate genes. The vertical bars indicate the percentage of reexpression of the 524 upregulated genes following demethylation treatment in the 15 cell lines.