Dysfunctions of neuronal and glial intermediate filaments in disease

Dysfunctions of neuronal and glial intermediate filaments in disease

Intermediate filaments (IFs) are abundant structures found in most eukaryotic cells, including those in the nervous system. In the CNS, the primary components of neuronal IFs are α-internexin and the neurofilament triplet proteins. In the peripheral nervous system, a fifth neuronal IF protein known as peripherin is also present. IFs in astrocytes are primarily composed of glial fibrillary acidic protein (GFAP), although vimentin is also expressed in immature astrocytes and some mature astrocytes. In this Review, we focus on the IFs of glial cells (primarily GFAP) and neurons as well as their relationship to different neurodegenerative diseases.

The major IF proteins in neurons and glial cells. 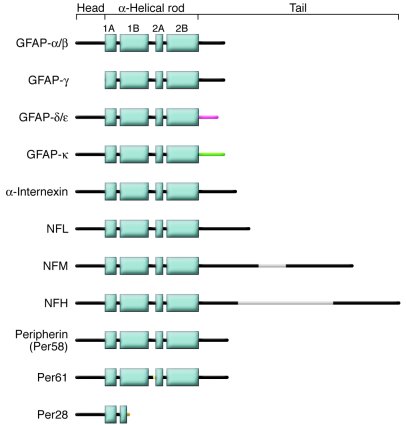 A “typical” IF protein consists of an N-terminal head region, a rod region that contains four α-helical regions (helices 1A, 1B, 2A, and 2B), and a C-terminal tail region. Different isoforms of GFAP are shown: GFAP-α and GFAP-β are full-length GFAP proteins; the mRNAs encoding these two proteins differ in the 5′ UTR. GFAP-γ is encoded by an mRNA that has an alternate start site and is missing exon 1. The mRNAs encoding GFAP-δ, GFAP-ε, and GFAP-κ are generated by alternative splicing of intron 7, with variable use of exon 7+, to create proteins with different C-terminal tail sequences. Only single isoforms of α-internexin, NFL, NFM, and NFH are shown. The gray areas in NFM and NFH contain multiple phosphorylation sites. Full-length peripherin (Per58) is shown as well as Per61, a mouse isoform that retains intron 4 (), and Per28, which is a mouse and human isoform that retains introns 3 and 4, resulting in a truncated peripherin ().